In December, when Charlie Weis and Steve Kragthorpe are fired, there will be many stats put up to back the decisions.  Significantly falling short of expectations on many accounts, folks will have no problem identifying the reasons for their dismissals.  And yet...all of them will be wrong.

Because there is one common bond that the two coaches share that truly explains everything.  A singular individual, NAY, entity, that surrounds them, overcomes them, invades them and evades them. 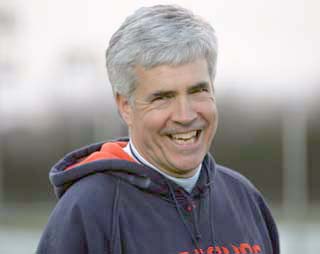 Greg Robinson won ten games as head coach of Syracuse University.  Three of those ten were against the aforementioned coaches.  Now, as DC of Michigan, Robinson was once again on the winning side against Weis, presenting Notre Dame fans with the truly disturbing fact that, in college...

TV analysts have been falling all over each in the past few week to praise Robinson.  As if they bear some sort of responsibility for educating the public that Greggers is more than his four year stint at SU.  The prevailing opinion being that GRob is a better DC than a head coach, which may very well be true.  Of course, they usually leave out that he was also one of the DCs at Syracuse for a time and that the reason he didn't have much talent at SU was his own doing, but whatever.

At halftime of the game, Robinson was asked if he had the Syracuse game on his mind as Michigan was attempting to come back.

"I'm not worried about all that, I'm just worried bout being here."

Mature and well-spoken.  We expect nothing less from Greg.  Move forward, let go of the past.  And Greg, we Syracuse fans want you to know that we're happy for you.  If you're ever down, just look in our direction and we'll be sure to send you a message of hope that comes from the bottom of our heart: 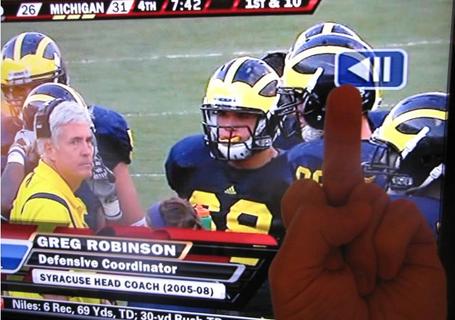