Kidding, we just made fun of Greg Paulus and Joe Paterno a lot.  Part I is below, Part II of the conversation up on BSD.

Kevin: Unfortunately for you we have to start with the obvious. Is Greg Paulus really part of the family already? Competence cures a lot, I'm guessing?

Sean: There's a scene in a Simpsons' episode where, 1,000 years in the future, Bart is re-animated via a hand-print he left in the cement. When he appears, he starts playing with a yo-yo as the crowd Oohs and Aahs. Someone says "What's normal to him amazes us!" and another person in the crowd utters "He will be our new God."

That pretty much sums up how we're feeling about Paulus, give or take.

The mere fact that he walked onto the football field, seemed to handle himself in a relatively good manner, was able to grip the ball, throw it and gain yardage AND throw a touchdown to boot...he might as well have hung his jersey in the rafters after the game.

Seriously, what Paulus did which was so calming and soothing was prove to us that he's competent on the football field. He's going to be able to manage football games. He's going to be able to lead these guys. And he's going to get better as the season progresses. The interception was...awful. Textbook freshman mistake. But that's the rub with Paulus...he's got some senior and some freshman tendencies in him. But we've seen enough in that game to trust that it won't happen again and he'll get better.

Believe me, everyone WANTED to cheer for Greg. Syracuse fans needed this to be a feel-good story. And God dammit, we're going to make sure it's one. I have a feeling we'll talk more fondly of Paulus years from now than he probably deserves, because we want it to be that way.

So we have a very clear 2009 storyline, what is Penn State's?

Kevin: Not a very exciting one. You know that feeling you have about The Office coming back for it's sixth season? That's kind of how I've felt for the last four weeks about Penn State football. Sure I'm excited, and all the main charters are back, but I wasn't sure some of the less visible roles would be filled properly. The thought of a knock out season seems strangely distant despite the fact that the odds maker give the team a remarkably high chance of hitting The Record That Shall Not Be Named.

Here is the storyline that should be running, though, if the media (stupid media) wasn't so busy with the Preseason Holy Trinidad: 2009 could signal a lead change in Big Ten front-running. The last four Big Ten championships have been split up between Penn State and Ohio State, and if Paterno takes one this fall that will be his 3rd in 5 years.

And shift could be a significant one. Jim Tressel hit it big in 2002 but has lost his flair over the last couple of years for reasons I don't need to explain, and this Pryor/Vick Denial stuff reaks of weakness. His own subjects are calling him 2003 Loyd Carr, and that can't be a good thing with USC ready to pounce on Saturday.

There is tremendous opportunity for Penn State, that's the point.

I saw The Express last weekend and thought it was fantastic. Any chance your season can keep me as entertained? I mean who in the league can really claim to be that much better than you?

Sean: What Syracuse football lacks in heart-tugging melodrama it can certainly make up in exciting football montages. And worst case, just like in The Express, we can just lie and say the West Virginia fans hurled racial epithets at us to play the sympathy card.

Speaking of The Express, they just unveiled a new pre-game video that plays before the Orange run out onto the field. It's really well made. And Dennis Quaid appears in a good portion of it. More than some of Syracuse's prominent coaches and players. Within five years we're going to have people convinced that he actually coached here.

As for who in the Big East can keep you entertained, there's a few options. None of them really involve dominant, smashmouth football. Instead, it's more of a trainwreck, can't-look-away variety.

Take Rutgers, who one week into the season blew the best shot they've ever had (and probably will ever have) at winning the conference and playing in a BCS Bowl. They'll end up with a decent record since their schedule includes several kindergartens and a Jewish summer camp but anything short of a conference title has to be considered a disappointment for these guys this season. That'll be fun to watch.

Watch South Florida if you want to see what Brett Favre would look like if he was really, really good in college and looked like a Cabbage Patch Kid. Seriously, Matt Grothe is not an attractive man. Must be why he continues to overcompensate and force so many INTs.

Louisville is primed for another disastrous season and the end of the Kragthorpe Era. It's always fun to watch a coach cling to life via false-positive coachspeak and AD denials of a change with every 30-point loss. Believe me, Syracuse fans know how the game is played.

Unfortunately, it looks like the conference title will be in the hands of two of our best yet uninteresting programs, Cincinnati and Pittsburgh. Congrats to whichever one ends up in Miami losing to Virginia Tech by 24.

So straight up, seems like you feel good about Penn State's conference chances. How bout national title hopes? Is this the last, best chance for Paterno?

Part II can be found here... 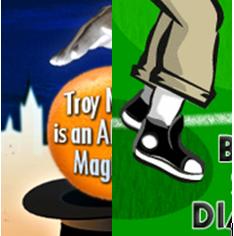