The Quest For Toronto 2009: Tremendous Standpoint

Share All sharing options for: The Quest For Toronto 2009: Tremendous Standpoint For those of you too young to remember what The Quest For Toronto is and where it came from, I'm just going to regurgitate my previously-written explanation.  Plus, I'm lazy...

It wasn't long ago that Syracuse fans took bowl appearances for granted. So much so that the team's inclusion in the 2004 Champs Sports Bowl was looked on as an unjust result for such a storied program. For our insolence, punishment was swift and it was mighty. And ever since that fateful day the Orange have not sipped from a bowl, be it Peach, Orange or Poulon Weedeater.

Many have called for a return to glory, a return to a bowl game. Easier said than done. Some want to set their sights high, with visions of Gator Bowls dancing in their heads. But that takes 9-10 wins. Others would be happy with a trip to sunny Birmingham for a Papajohns.com Bowl stage. But even that asks for 7-8 wins. Remember who you're dealing with and what schedule they're dealing with. It's not fair to ask for that many wins from this team.

But what about six wins? That's not asking too much, is it? That's almost how many we've won in the last two seasons combined, surely we can speed up the timeline just enough if we try. And six wins is all you need to become bowl eligible. Sure, six wins won't get you to Florida. It won't get you to Alabama. It won't even get you to Kentucky.

But it can get you to January.

And so, I give you The Syracuse Orange and the Quest For Toronto 2009. 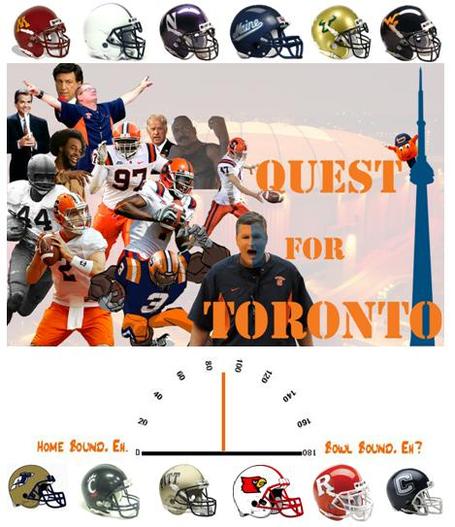 The International Bowl. The only bowl played outside of America's borders, and hence, outside of the laws of America, nature and Jesus. Anything can happen. No late hits. Spike-embedded shoulder pads. Impromptu cockfights. It's like playing a football game in international waters. Except on land. Maple-syrup-crusted land.

Plus, you know, we probably won't have much of a choice if we are bowl eligible. You really think the St. Petersburg Bowl is itching to try and sell tickets to the notoriously travel-shy SU fanbase for a match-up with a 6-6 Conference USA team?

That said, the International Bowl would be a shining culmination to a season of redemption for the program:

For a football team ready to re-emerge into the national spotlight and prove to the country, nay, the world, that they are once again a force to be reckoned with, there is no better litmus test than a 6-6 MAC opponent.

For a team that spends all season inside a dome to protect itself from the harsh condition outside, there is no better way to let loose and take in nature's glory than play...inside another dome.

For the long-suffering fanbase, there is no greater reward for the snowed-in people of Syracuse, NY than the chance to spend their hard-earned vacation time in a city even further North during the dead of winter.

International Bowl, thy name is redemption. Syracuse football, thy quest is clear.

Each week, the dial on the Quest-O-Meter will move.  The direction is based on how well Syracuse did in that weekend's game.  Every win moves the dial closer.  Every loss moves the dial further away.  God willing, we'll still be talking about and fretting over the Quest well into Week 10 & 11 of the season.  We have yet to make it that far.

A new era.  A new Quest.  A new day, ladies and gentlemen.  Book your room at the Toronto Airport La Quinta Inn...NOW!

H/T: Erin & Alex for the artwork.  I liked them both so much I'm going to use them both.