Sorry You Had To Hear About It From Ivan Maisel, Mrs. Marrone

Share All sharing options for: Sorry You Had To Hear About It From Ivan Maisel, Mrs. Marrone

Damn you, Maisel.  Have you no shame?

You know things are on the up for Syracuse football when ESPN is willing to promote the program front and center on it's college football hub: 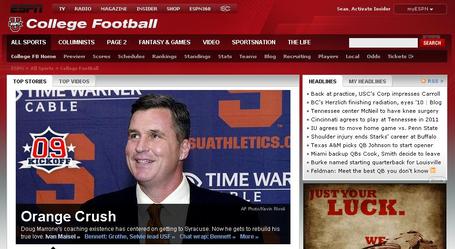 All of that said, the article itself is a glowing tribute to Doug Marrone's tenacity and, yes, love for the right to call himself the head coach of Syracuse football.

For 17 years, Marrone climbed the coaching ladder. As he stepped on every rung, from small college to big, from the SEC to the NFL, from assistant to coordinator, Marrone thought, "How will this help me be the head coach at Syracuse?"

This is not the tale of one man's obsession. This is a love story. In December 2008, Marrone, 45, took over the Orange. When a writer struggled this past spring with how to define Marrone, he replied, "I can answer that question. I'm the luckiest guy in the world."

There's a great anecdote from former Syracuse offensive coordinator George Deleone about how much of a complainer Doug was when he was at SU.  It was when he learned that busting your ass did more than sitting around worrying that he really turned things around.

Maisel also speaks with DOC Gross about the actual hiring process and what Marrone was like on his visit.  We haven't gotten all of the details about each candidate and probably never well, but sufficed to say none of them reacted the way Doug did to the opportunity:

"It was snowing like mad," Gross said. "We get out of the car. There's four inches of snow and he's jumping around. He gets it. He's been there. He's looking around. 'That's where I had this class. That's where I did this.' It was something so comforting. Wow, he really understands Syracuse University, the Hill, the professors."

It's certainly not a prerequisite to be familiar with the landscaping before becoming the head football coach somewhere.  But in Syracuse case, given what we was replacing and what he was stepping into, it's been extremely comforting.