Share All sharing options for: Oh, The Slices You'll Eat

Incoming Syracuse freshman...WELCOME!  Well, as much as I can actually welcome you since I'm actually 3,000 miles away.  I'm kinda like the stewardess on the plane that just welcomed you to your destination even though she just got there the same time as you.  Not quite right and yet...it still makes sense.

So many wonders and exciting moments for you to behold in the coming days.  New friends!  New classes!  New beers!  I'm here to help if you have any questions.  My advice?  Keep it simple.  You don't want to be The Guy Who Ended Up Naked In The Elevator your first week at school.  That shit will haunt you for the next four years, thereby defeating the entire point of going away to college i.e. to wipe the slate clean on your reputation.  Wait until you're at least a sophomore to wake up naked in the elevator.  By then it'll be edgy and hilarious.

I do want to talk to you about one thing, however.  Food.  You're going to be eating a lot of it.  I know, I know, you're aware of the Freshman 15 and you're going to do your best not to fall into that trap.  That'll last a while...at least until your eigth Keystone Dry on Friday night.  Around that time you're gonna be so hungry you'll start imagining your roommate is a walking hot dog (if he's skinny) or hamburger (if he's chubby) like in those Bugs Bunny cartoons. I suggest you stop licking your licks ominously and head down to one of the many eateries at your disposal.

Look, if we're gonna go do this, we're gonna do it all-out.  Doug Marrone-style.  110%.  Below are my suggestions on how to take advantage of what's out there.  I'm not suggesting that you pack on the pounds to the point of obesity.  I'm very much against that.  I'm just saying...I know you're gonna be an idiot about this.  So you might as well be the best idiot you can be. 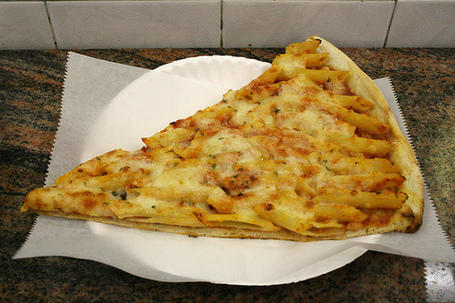 Let's get this out of the way first.  You're going to eat a lot of pizza over the course of four years.  I mean, a LOT of pizza.  I know, you're sitting there saying, "I'm from Staten Island/Belmar/Lindenhurst, I know about pizza, a-hole."  I'm sure you know about pizza, but you haven't yet begun to eat it.  I promise you that.  Cause here's the thing about college...it's the only time in your life where a slice of pizza is considered a side dish.  Once you accept that, you will understand just how much cheese, sauce and dough you are about to ingest.  And if you're gonna do it, DO IT.

Besides, try as you might, you can't outrun Sbarros on the Syracuse campus.  It will find you.  It will own you.

The Slice Of Pizza With A Side Of Ranch Dressing 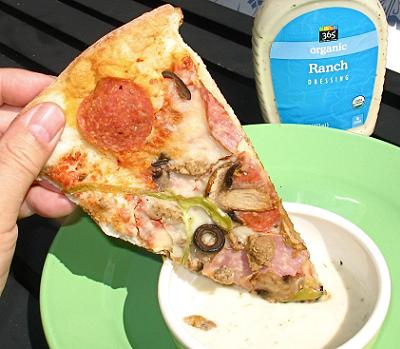 Oh, I assure you the slice AND the ranch dressing don't actually look anything like this photo.

Here's what I wrote in my 2007 Welcome to new students (with a slight edit):

It's 3am. The pizza van on University Place and Ostram. You ask for a slice of pizza. They offer you a side of ranch dressing to go with it. I'm not gonna lie to you, its the greatest edible concoction ever invented. But when you wake up tomorrow, I guarantee you the very thought of it is going to make it all come right back up.

Seriously, I cannot stress this enough...if you can, throw out the remains at the end of the night.  You DO NOT want to wake up and see the remaining cup of ranch slop with a slightly hardened film on it next to a half-eaten slice of pizza next to your bed when you wake up.  There is nothing more vile.

But it taste amazing at 3am.  It really, really does.

It's called Sassy Sauce.  What else do you need to know?  You could pour a concoction of squid ink, Doug Marrone's thigh sweat and human waste into a 12 oz. bottle, slap a label with the words "Sassy Sauce" on it and I'd chug it down without even thinking about it.  That is marketing GENIUS!

Here's the thing about Sal's Birdland Wings...you gotta just put your head down and chew.  Because every so often you're gonna bite down and something that's not supposed to be there is gonna be there.  Is it a tendon?  Is it some kind of sinue-y leftover?  Is it a feather?  I don't know.  Furthermore, I don't want to know.  I'm just eating.  LIKE A BOSS.

Besides, you've dunked that wing in so much Sassy Sauce at this point, it's irrelevant.  Just be careful not to get any Sassy Sauce on your fingers or other extremities.  They will be eaten by accident.  I've seen it happen.  R.I.P. Billy Goldfarb. 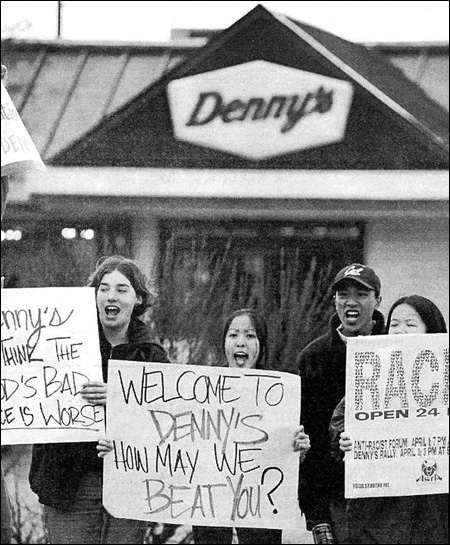 I mean, it's Denny's.  You know what you're in for.  Just as an aside, if you're African-American, Asian or Hispanic, you WILL be a part of a hate crime.  So...apologies in advance on that.

If you were judging a pizza place by it's website, Cosmos would not be in good shape.  Then again, based on the quality of their pizza, this is exactly how I would expect Cosmos' website to look.  They're open late, later than most, so it's very tempting to get Cosmos pizza late-night.  I beg of you, try not to.  Plan ahead, call up Dorian's around midnight and place and preemptive order.  Grab a pie at Acropolis on your way home...maybe better to grab two since the first one will be gone by the time you get there.  Just don't eat Cosmos at 2am.  I've asked a lot of your stomach so far...but I can't ask it to do this.  It's criminal. (I'm not alone in thinking this, clearly)

That's all just some starer points for you.  Use them wisely.  I'm sure you'll disregard my warnings, and I'm sure you'll pay for it.  You're about to begin a wonderful journey.  And when you look back on it all, all the memories, all the good times, all the football loses, all the cherished moments and all the extra pounds...you'll look back to now and remember where it all began.