Obviously, the most important thing for Syracuse football this upcoming season is the return of Kenny's 2 Pennies. That's a given.  The analysis and magic that Kenny Haas brings to the table in unparalleled.

But that kind of magic doesn't just happen.  It's cultivated.  It's grown.  It's 100% cotton.  You see, you can't have Kenny without a schnazzy Syracuse T-shirt on his person.  It's un-American.  Thankfully we now know that Kenny will indeed have new threads for a new era.

One lucky Syracuse fan just ran into Kenny at T-Shirt World on Marshall Street (Hurry! He may still be in the vicinity!) and snapped this photo of the man in action: 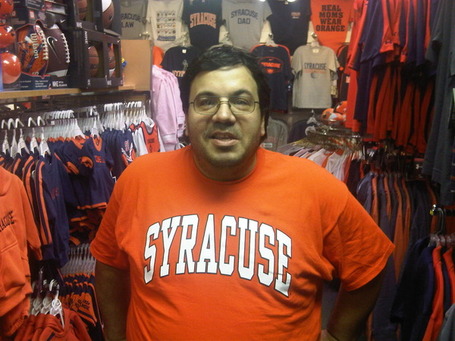 Which one will he choose!?!?!? I'm pulling for the Real Moms Wear Orange shirt back there.

(By the way, how do the employees of T-Shirt World police shoplifting?  75% of the people that walk in there are already wearing a Syracuse t-shirt.  It must be maddening.)