Before we do anything, you simply must go look at that photo of Doug Marrone in all his thigh-pushing glory right now (another version here).  Glorious.

Special kudos goes out to Conor Orr at the D.O. for working in the phrase "hogmolly."

Andrew Robinson sighting!  The former quarterback and once savior-in-waiting is currently working as the second-team holder with the kicking team.  Robinson continues to just put his head down and do what he can for the team.  Seriously, we all need to buy this kid a beer one day.  Class f***ing act.

Also nice to hear Shane Raupers is not afraid to get into it with his special teams unit when they screw up.  Hooray leadership.

A bunch of players are trying out new helmets, courtesy of Riddell.  The polycarbonate helmet with fancy indentations and padding is catching in around the lockerroom and you can expect to see many of the SU players wearing it during the season.

Check out some video of Ryan Nassib working with the other quarterbacks and the o-line.  Special bonus...Doug Marrone in ACTION!

Oh and just in case you didn't understand why they're referred to as "hogmollies"... 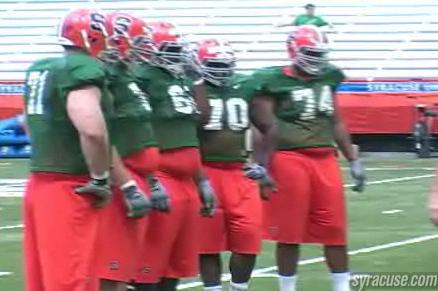 Mitch Browning would not be pleased.