It was The Heluva Good! Sour Cream Dips at The Glen weekend this past weekend (I've read that sentence five times and it still doesn't make any sense to me).  In layman's terms, Watkins Glen hosted a couple of them car races this weekend, including the Zippo 200, whatever that is.  Marcos Ambrose, whoever that is, won the race, whatever that means.

The big story was not who actually got in the cars and went in circles really fast, it's who told them to turn on their engines so that they could do so.  Tremendous Doug Marrone was on hand as the Grand Marshall of the race and Doug came out in his Sunday finest for the day: 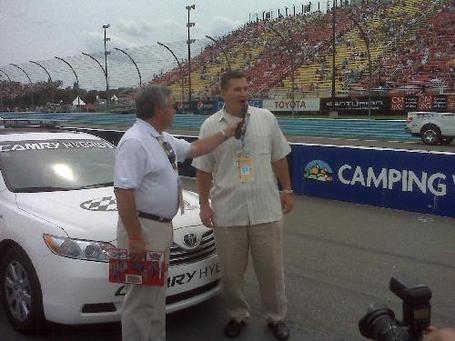 Get this man a Dockers sponsorship ASAP!

By the way, look closely...Doug Marrone abhors socks.  They sop up all of your determination and grit.

Easy on the microphone, buddy.  You can back off a couple inches, it'll still work.  Besides, Doug Marrone's voice is known to be heard upwards of three miles away on a clear day.