If You Play Football In The Bronx, You Will Play For Syracuse

Share All sharing options for: If You Play Football In The Bronx, You Will Play For Syracuse

Seriously, if you're a two-star or better high school football player.  Move to the Bronx.  Sounds crazy, and you'll have to put up with all those meathead Yankee fans, but I guarantee you, you'll get a Syracuse football scholarship out of it.

The latest recruit to verbally commit to the Orange for next season is Jeremiah Kobena of Cardinal Hayes High School. Kobena comes to us with an ATH tag and he's bringing a helluva lot of speed with him:

Kobena (6-foot, 185 pounds) finished sixth in the New York State 100 meter finals this season at Cicero-North Syracuse High School. He also won the city championship in the event and has run the event as fast as 10.8 seconds

Kobena has been playing wide receiver and tailback and has been told by Syracuse coaches that he will has a similar role to C.J. Spiller from Clemson, who does a little bit of everything for the Tigers.

Orange offensive coordinator Rob Spence came to Syracuse from Clemson where he coached Spiller, who rushed for 629 yards and seven touchdowns last season along with catching 34 passes for 436 yards and three touchdowns.

Kobena was up in Syracuse back on June 12th for the NY 100-meter finals.  He chose SU over Rutgers and Pitt (Sorry yet again, Rutgers).  Kobena doesn't show up on too many football recruiting sites or charts but he says he "had about 1,000 all-purpose yards last season and seven touchdowns."  Presumably, Marrone and Spence just see so much raw talent here, it's worth the risk. 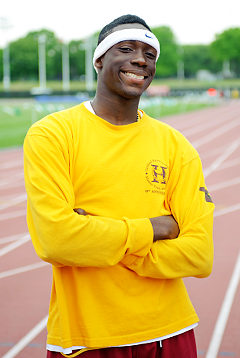