Carmelo Anthony And The Goblet Of Ire

Share All sharing options for: Carmelo Anthony And The Goblet Of Ire

You know how when you were a kid, one of your friends had a little brother.  And you used to treat that scrawny kid the same you treated a nerf football.  You'd grab him, throw him around, squeeze him until he damn near broke and then toss him aside when you were done.  You know, because you could. You didn't hurt him or anything, cause he was a sweet kid, but you knew he wasn't gonna fight back too.  And then one day, years later, you pulled into Dairy Queen to get one of those ice cream cones with the quick-hardening chocolate/cement concoction they poured on there and you notice a group of kids hanging out in the parking lot.  It dawns on you that the d-bag blasting bass out of his ghettoed-out 2001 Honda Civic with his hat tilted to the side, pants hanging low and Phillie blunt hanging out of his mouth is that little brother.  You just watch with a mixture of confusion, pity and hilarity as this guy you will always know as the nice, little kid that you used to push around does his best imitation of a tough guy.

In a nutshell, I think that what Syracuse fans think of when they see photos of Carmelo Anthony like this: 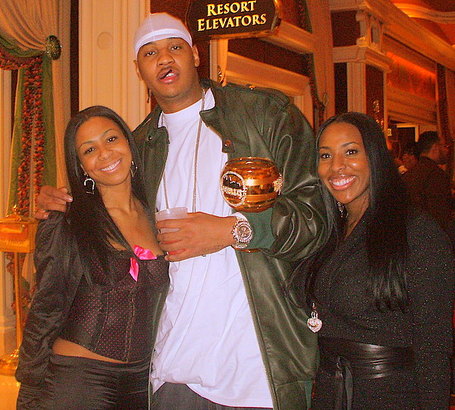 As tipster Shauna says..."There are many, many questions to be asked about this photo. For one, if he is drinking out of a plastic cup, what is the purpose of the goblet?"

See, I like to imagine there was a moment where a nervous casino security card had to walk over to Melo and say politely, "Sir, we're going to have to ask you to pour the contents of your goblet into a plastic cup.  Casino policy."  You can carry the goblet with you, you just can't use it as a beverage receptacle.

Speaking of, why hasn't anyone gotten into the business of sports-insignia goblets?  Sportz Gobletz. No-brainer, folks.