Share All sharing options for: The Fauxhawk Is So 2008

He's always one step ahead of the trends.

He knows how to handle balls.

The Clutch Canadian has embarked on his world fashion tour which is currently hunkered down in Trento, Italy for the Trentino Cup.  The Canadian National Team played in three games over the past few days. Andy was 2nd on the team with 15 points in a loss to Italy.  The team rebounded with a 74-55 win over Portugal the next day and finished the tournament with a 90-68 win over New Zealands Tall Blacks (Not racist!  That's what they're called!)

For Canada, Andy Rautins, son of head coach Leo Rautins, hit on four of his six three-point shots and scored a game-high 20 points, while Levon Kendall had 15 points on 6-of-9 shooting.

Scoring and becoming a leader are nice things, but let's face it.  That's not what this trip is about.  Rautins is in Italy, one of Europe's fashion capitals.  And there's no better time than now for Andy, the trendsetter he is, to unleash his brand new 'do for the 2009-2010 season.

The fauxhawk?  Please.  Last year's collection simply will not do. Besides, there's only so long you can keep shaving the sides of your head.

So how do you top the minimalism of last season's collection?  You go the completely opposite way.  From this Canadian Team video, we get our very first glimpse at what fashion experts are calling...the Hand-Runner. 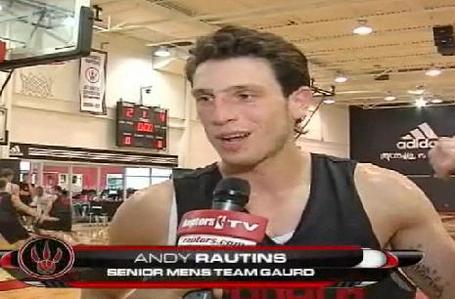 Named the Hand-Runner because just the site of those full, fluffy locks makes you want to run your hands through them all day.  Rautins is also adding to the repertoire by sporting the beginnings of some Grizzly Adams scruff to compliment the more rugged look. The word from Paris is resounding applause.

Ladies of Syracuse University, expect to see entire dorms full of guys with the Hand-Runner by October.  Guys, load up on Axe styling gel.  Get a six-pack if you can.