The World's Lobster Population Is About To Drop 7%

Share All sharing options for: The World's Lobster Population Is About To Drop 7%

The unofficial team record, seven lobsters, was achieved last year by Durand.  Not only is there a strong possibility of that falling this year, but the unofficial Big East record of nine lobsters, held by Rutgers fullback Brian Leonard, may very well go down too.

Sources tell me that lobsters are being flown in from around the world to accommodate the trio, including some of the world's most famous lobsters.  Once though inedible, Venezuela's 467-pound Langosta De Mil Muertes (Lobster Of A Thousand Deaths) is expected to be presented before the group.  Rules stipulate that the monster must be subdued by it's eventual eater first before being boiled.  Thirty-seven men are said to have perished in his claws. (Pictured below) 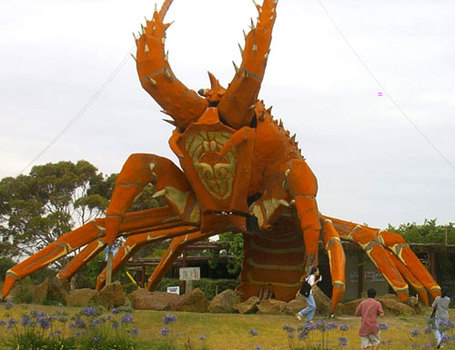 The time for talking is done.  The time for claw-cracking and butter-dipping is about to begin.