Rene, Ross...Oh! Both Commit To Syracuse.

Share All sharing options for: Rene, Ross...Oh! Both Commit To Syracuse.

Even I think that headline is too much of a stretch.  And I wrote it.  And kept it.  And published it.  And am now drawing attention to it.

The verbal commitments roll on for Syracuse football.  First up, according to Donnie Webb, KR, PR and general ATH Steven Rene from Brooklyn has committed to play for the Orange.  The Canarsie High School all-purpose back is considered one of the top prospects in NY and also held offers from Temple, Rutgers, Boston College, Oregon, Hofstra and Stony Brook. Rene earned All-City and All-Borough honors and was selected as the Old Spice Red Zone player of the year, so you know he smells great.

In fact, Rene is on record as recently as two weeks ago saying Rutgers was his favorite at the time.

"Rutgers," he said when asked about his favorite. "I went to their spring game and I saw their facilities when they gave me a tour around. The coaches have called me and they write me and e-mail me, telling me they want me to come to their camp."

Apparently not enough.  In the Rivals' article Rene says he's not anywhere near close to making a decision. Then, he visited Syracuse:

"Everything was perfect," said Rene of his unofficial visit to the Syracuse campus on Tuesday. "The campus, the facilities, the Dome ... everything was a major shock. As soon as walked into the building, I saw the big trophies, the pictures of Ernie Davis, Donovan McNabb, Keith Bulluck ... it was wonderful. It was inspirational, especially Ernie Davis. He was a running back, the same position I play. It was awesome. I could see myself playing there."

Probably shouldn't have used the line about we're going to re-name the new basketball facility The Rene Center.  Might be a little much, but hey once he's signed we can go back to Melo.

All you really need to know about Rene can be found in this highlight video.  The very first highlight is him kicking off...and then barreling down the field and flattening the kid who catches it.

SU wasn't done today with all the verbal commitment.  According to Donnie, kicker Ross Krautman of Ramapo High School in New Jersey also made the decision today. And it's where Krautman was last week that makes this one so sweet.

Syracuse football fans will like this - after winning a kicking camp a few days ago at Rutgers University, Ross Krautman made a verbal commitment on Wednesday to sign with the Orange in 2010.

He is the younger brother of former Syracuse University kicker Ricky Krautman.

Sorry Rutgers, all your in-state recruits are belong to us again. Ross was 37 for 37 PAT's with 25 touchbacks this past season. He is 79/80 on PAT's for his career.  He says Syracuse has always been his dream school. 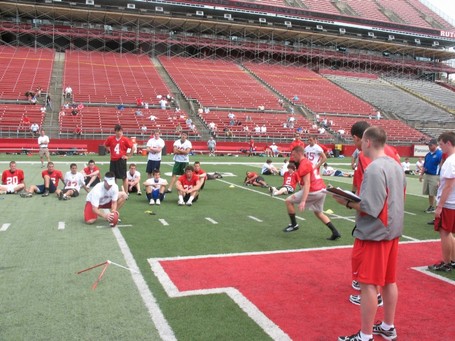