Did Anyone Actually Check To Make Sure The European Kids Knew How To Play Football?

Share All sharing options for: Did Anyone Actually Check To Make Sure The European Kids Knew How To Play Football? 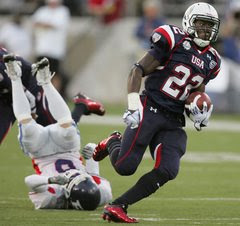 Um...good job Sweden?  Way to hang in there?

Yep, those were scores from this past weekend's International Football Jr. World Championships and I think we can all agree that the point has been made...North America is much better than everyone else at American football.  Glad we finally settled that.

SWEET MOTHER!  The French team averaged 0.1 yard-per-play!  We are the worst hosts ever.

Helping lay the smack down on those Jr. Frenchies were three soon-to-be Orangemen.  Linebacker Brandon Sharpe, defensive backs Shamarko Thomas and Phillip Thomas all played a part in the beat-down.

What's up next for the Americans?  A little bit more of a challenge, I guess.  They get Mexico on Wednesday, who is coming off that 34 point win over the Swedes, which may or may be anymore impressive than the USA win.  Win that one and it's on to the Gold Medal game against either Canada or Japan.  I'm guessing Canada.

Hopefully the US will win this thing and we can all say "well, duh" and no one will be injured and we can all move on with our lives.  Certainly, there's no reason to add any other signifigance to what is clearly just a series of one-sided exhibitions:

"There are a hell of a lot of people who fought and died for those three letters," [Team USA coach Chuck Kyle] told his young gridders, according to the Cleveland Plain-Dealer.