Share All sharing options for: The Syracuse Football Recruiting Map Is Fully Operational

You know I'm not the most recruiting-mad Syracuse fan out there but FSU blog Tomahawk Nation had a great idea over at their site that I decided was worth stealing.

I took this list of 2010 football recruits that Syracuse currently has offers out to.  I trimmed away a couple of players who have already committed elsewhere (I know they can still change their minds but whatever).  I sorted out where they live by town or zip code and...voila!

Under Greg Robinson, the talent pool and recruiting based dwindled to the point where if the player wasn't in NY, PA or NJ, they were out of reach.  Now?  Look at Florida, Ohio, Georgia and Maryland.  We're all up in that! 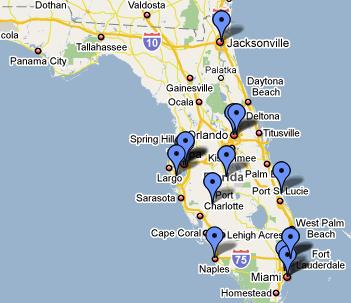 Of course, PA, NJ and NY are still our bread and butter and there's plenty of dots on the map in those states as well. Just looks great from an SU fan perspective to see the reach of the recruiters and know that there is no player too far away for them to consider, even now.

So scroll around, see if there's any recruits in your area.  Then cross-reference with that list to see how good he is...plenty of four-star and three-star guys on that list.  As Tomahawk Nation puts it, "Have fun obsessively stalking observing these recruits this Fall!"