The Big East's Most Embarrassing Non-Conference Games Of 2009

Share All sharing options for: The Big East's Most Embarrassing Non-Conference Games Of 2009

Oklahoma blog Crimson and Cream Mahcine posted the Big 12’s Most Embarrassing Non-Conference Games Of 2009 today and it's an entertaining one.  Being that it's also the day I found out about South Florida's scheduling wussery, I couldn't help myself but come up with a Big East version.  And here we go...

#13 - Wofford @ South Florida, September 5th - The "better" of USF's two FCS opponents, the Terriers (yikes) are coming off their second-straight 9-win season.  They even played South Carolina commendably, losing 23-13.  The West Virginia Mountaineers skinned the Terriers 35-7 a few seasons back, the Bulls shouldn't have any more difficulty.

#12 - Liberty @ West Virginia, September 5th - West Virginia starts off their season against Liberty, which doesn't even actually sound like a real university.  Their nicknames, the Flames, doesn't help matters. However they're actually coming off a 10-2 season and almost beat FBS Toledo two years ago.

#11 - Maine @ Syracuse, September 26th - Insert the "I'm not sure which school should be more embarrassed for scheduling the other" joke here. Maine's not a shabby FCS school, if you're going to play one, coming off an 8-win season.  But whenever they come a-calling for the FBS, it never ends well.  They lost 38-0 to UConn two seasons ago and 46-3 to Iowa last year.

#10 - Florida International @ Rutgers, September 19th - Last season's win total matched an all-time high for the Panthers.  Problem is...it was five.  They mostly play the fellow dregs of FBS and any time they aim high, it doesn't go well (see Iowa, 42-0 and Kansas, 40-10).  They did beat Western Kentucky though!

#9 - Charleston Southern @ South Florida, September 19th - The Buccaneers aren't a particularly horrible FCS team, coming off a 7-5 season.  Except when they played FBS teams, such as Miami (FL) who beat them 52-7 and Miami (OH) who won 38-27.

#7 - South Florida @ Western Kentucky, September 12th - Welcome to full-time FBS status Western Kentucky!  Bad news though, you're officially the worst team of them all.  The Hilltoppers went 2-10 against a mostly FBS schedule last season which included a 41-3 loss to Kentucky.  They did win two games...against the only two FCS teams they played.  Double word score to USF for playing this one AT Western Kentucky, capacity 17,500.  At least Kige will be there. 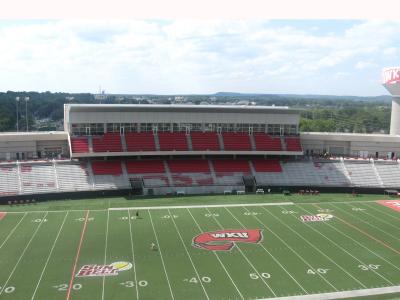 #6 - Southeast Missouri State @ Cincinnati, September 12th - The Indians (Wait, how'd they get to keep that?) are coming off a 4-8 season in the FCS, which includes a 52-3 loss to Missouri.  They beat Indiana State, but pretty soon you'll find out why that's not anything to brag about.

#5 - Youngstown State @ Pittsburgh, September 5th - You're thinking, "Wait, aren't they like the USC of the FCS?"  Well they WERE the USC of the FCS.  Now they're just another 4-8 team, having lost 43-0 to Ohio State last season, one of four times they gave up 40+ points in a game.

#4 - Texas Southern @ Rutgers, October 3rd - Texas Southern went 4-8 last season and they're not even the worst FBS team on the Scarlet Knight's schedule!  Last year included an 83-10 loss to Arkansas State, one of four losses in which the Tigers gave up 40+.

#3 - Rhode Island @ UConn, September 26th - The Rams are coming off a 3-9 season that includes a 42-0 loss to Boston College.  It's like they're going out of their way to visit all of the area bullies so each one gets a shot to pummel them.  URI hasn't won more than four games in a season since 2001.