Share All sharing options for: Doug Marrone Is A Five Tool Talent

Big day for Dougles yesterday.  It started in Elmira where he met with the local Rotary club (to this day I assume they just sit around checking out wheels...am I crazy?) and then posed with an Ernie Davis statue, as is mandated by Syracuse law.

Then it was off to Binghamton where Doug was set to throw out the first pitch for the Mets.  But before he could that, Doug decided to up the ante and step into the batter's box with the fungo and let'r rip. (Via Three Idiots)

Gotta say, Doug really knows how to explode through the hips.  NH.

Then Doug took to the mound and launched the first pitch.  This was no holy roller.  It didn't end up in the stands.  And it didn't brush the dirt as it crossed the plate.  No sir, Doug threw a strike.  Of course he did. 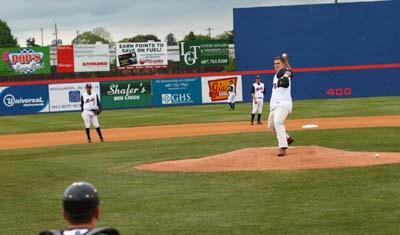 Those who have called for the creation of a Syracuse baseball team can rest easy knowing the once he's restored SU football to glory, that's next on Doug's list.

Doug gets a reprieve today before the next stop on the tour.  That's a May 7 visit with fans at The Rink/The Field Community Recreation Center in Ithaca from 9:00 a.m. to 11:00 a.m. followed by a dinner with guests at the Cortland Country Club.  No word on whether or not Doug will throw the opening bowl at the cricket match.