As you know, the Doug Marrone Whistlestop Tour is in full swing, having already made stops in Boston, Rochester and certain Syracuse-area places.  Today Doug makes a stop in Elmira for the Rotary Luncheon, hopefully stopping by Ernie's gravestone to pour a little out and finally tonight he'll throw out the first pitch at the Binghamton Mets game against the Portland Sea Dogs. 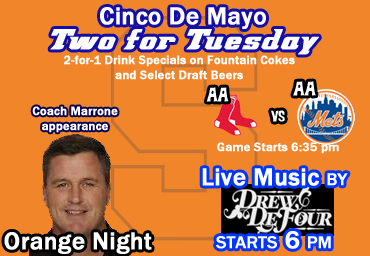 After that Doug will continue to barnstorm the Northeast, hitting all the hotspots for Syracuse fandom.  But there's one spot outside of the norm that Doug will be making a stop in next week that's interesting.

Destiny?  Is that you on line three?  I'm picking up.

Originally the word was that Doug's only appearance would be a donor-only event and despite the fact that I choose to give back to SU through the power of linguistics and witty repartee instead of cold, hard cash, only those who do the cash thing would seemingly be invited.

So I figured it was time.  Time to inquire with the good folks over at SU Athletics about setting something up separately.  He's here for three days, right?    Me and Doug.  Mano e mano.  Two men enter, one both men leave.

All that, or, I'm just going to interview him.  Either/or.

The find folks over at the SU Alumni Club of Southern Cal are throwing an event over at the ESPN Zone in Downtown LA.  Naturally, I'll be there.  But beforehand, I'll be sitting down with the man, the myth, the legend...Dougles. 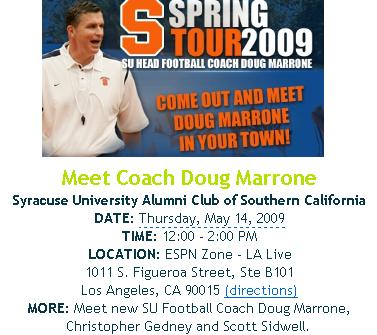 So here's the thing.  I need some help.  I've got a collection of questions ready to go already.  I don't want to go in there with the same generic questions he's been asked twenty times already ("So you've wanted this job for a long time, huh?" and "Is it important for SU to recruit New York state talent.")  I'll leave that malarkey for the sideline reporters.  That said, I'd love to ge in there with some questions from you guys, things you're dying to know.

Leave your questions below and I'll do my best to include a couple of the best, most interesting ones. Gracias and wish me luck.  And pray to God he doesn't find out about this beforehand.