First of all, you knew it had to happen.  The PaulusWatch graphic is here: 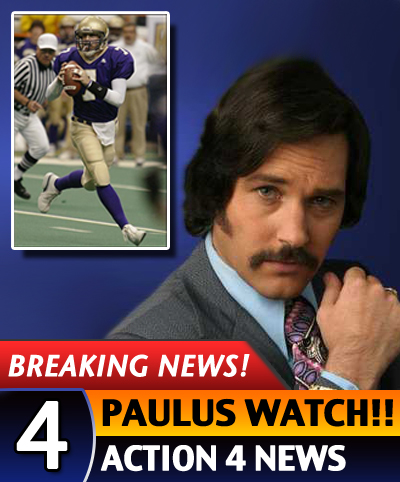 PaulusWatch. The mood is tense; I have been on some serious, serious reports but nothing quite like this. I uh... Greg... Greggy is inside right now. I tried to get an interview with him, but they said no, you can't do that he's like a live bear, he will literally rip your face off.

So how did the trip to Nebraska go for Greg?  Fine, I guess...

Paulus spent some of his first day here checking out Andersen Hall, UNL’s journalism college. Paulus has expressed an interest in broadcast journalism as a possible grad school option while he plays football.

When might a decision come? “Sooner than later, I think,” Joe Casamento, Paulus’ high school coach, told the Journal Star on Wednesday. “I don’t think it will go on more than two weeks.”

Nothing too exciting coming from Greg or Nebraska about his visit.  Privately things could be a different story but I'm just not feeling the love.

That's not to say others aren't excited about the opportunity to interact with Greg.  And by interact, I mean mercilessly torch the guy for the rest of his life due to his incessant flopping on the basketball court at Duke.  Over at the blog Fungible Convictions, they apparently had a run-in with Paulus while at a Nebraska bar.  Well, it wasn't so much a run-in as a flop to avoid a run-in...

Yesterday, Greg Paulus was visiting the University. I attend the University of Nebraska for those who don’t know (well, at least for one more week, I graduate on Saturday May 9). Greg Paulus is on my campus. Go through the entire day without seeing him. Fast forward to last night when we are downtown at the bars. I get a text from one of my good friends that says “Greg Paulus at the Rail!”. ******* awesome. First thought that pops into my head: we have to rip on him. And then it comes to me: the ultimate move.

Ahead of us, Greg Paulus is walking down the street towards us. Paulus is bordered by a random dude on each of his sides. My friend looks over at me and says “This is my moment. I have to do this.” As Paulus gets closer, he gets ready. And then right before they get to us, he slides over, sets up in front of Paulus at the last second, and Paulus bumps into him. He takes the charge, flopping to the pavement. Paulus then gets the weirdest look on his face like WTF? My friend makes the charge signal that referees do, gets up, and we continue walking. The look on Paulus’ face was priceless. After a few seconds of being confused as ****, I think it sunk in to him what we had just done.

When Greg picks Syracuse over Nebraska in a week or so, now you know why.