Who Wants To Win The Big East?

Share All sharing options for: Who Wants To Win The Big East?

The experts are beginning to chime in on who they expect to win the Big East conference this season and the answer seems to be...EVERYONE!

College Football expert Phil Steele says Rutgers has the inside track on the division crown (while his readers like West Virginia).

Athlon Sports thinks Cincy will repeat as Big East champs and puts them at #18 in their early poll.

The Sporting News college football yearbook is going with Pittsburgh, who needs to win a conference title already to validate Dave Wannstedt.

As Brian Bennett puts it, "it's going to be a fun year in the Big East."  For sure, if you set aside the national implications of not having an elite team, the regular season should indeed be a track meet between multiple Big East squads in search of a program-changing conference title. 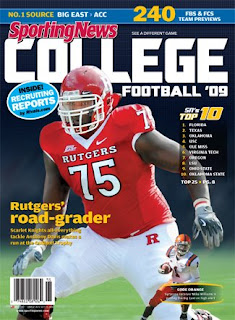 On paper, no one has a better shot that Rutgers.  As Bennett has detailed, their schedule could not be in better alignment if they tried.  As we've discussed here, their out-of-conference schedule should be sold at Sprinkles for $5 to hungry housewives. Maryland is the only decent team on the list, which includes 1-AA Howard, 1-AA Texas Southern, FIU and Army.  Then, the Big East schedule works in their favor in every conceivable way.  They host Cincy, Pitt, USF and West Virginia, all of whom are their most likely competition for the crown.  They visit Louisville, UConn and SU, all of whom are very beatable on paper.  Honestly, if Rutgers doesn't come away from this season with double-digit wins, the program should be disbanded. (And not everyone's convinced they're capable).

The Panthers benefit on the schedule front as well.  They open the season with Youngstown State, Turner Gill's Buffalo, Navy and NC State.  No major threats there, though the Wolfpack are hosting that one.  They also host Notre Dame later in the year, which seems winnable for the time being.  In-conference, they benefit from hosting USF, Cincy and UConn but they will have to travel to Rutgers and West Virginia.

The defending champion Bearcats are on the wrong side of the unbalanced Big East schedule and only host three conference games (L'ville, UConn, WVU).  They'll have to travel to Pitt, USF, Cuse and Rutgers where they open the season.  The OOC schedule is deceiving, beginning with cupcake Southeast Missouri State but mostly made up of frisky teams like Oregon State (in Corvallis), Fresno State, Miami (OH) and a late-season tilt against Illinois.  They'll have to be as good, if not better, than they were last year to repeat.

What of West Virginia?  The experts are writing the team off and that might be understandable given the loss of Pat White and...whatever else they lost. It might also have to do with their schedule.   While they begin the season with Liberty, whatever that is, and get Marshall a few weeks later, they're in for a very tough season schedule-wise.  They host a good East Carolina, travel to Auburn and then host Colorado.  It's not a murderer's row but it's dicey for a rebuilding team.  They host UConn, L'ville and Pitt but must travel to the Dome (never fun for them), South Florida, Cincy and Rutgers.  The Mountaineers will have to be surprisingly good to win the conference.

South Florida is always a trendy pick.  What about them?  Grothe is a senior, though he still looks like a Garbage Pail Kid, and George Selvie is a beast. The schedule looks promising right off the bat.  They host Wofford, visit Western Kentucky and host Charleston Southern.  Then Florida State comes to town, which is more winnable than it sounds.  Coupled with a game against Cuse the following week, no reason the Bulls shouldn't be 5-0.  They then run into a tough stretch with Cincy, Pitt, WVU and Rutgers that will make or break the season.  They finish with Louisville, hosting Miami (FL) and at UConn.  Gotta say, I think the Bulls *might* actually be able to come through this year.  Though we know what happens every time we start to think that...

Left out of the mix so far is UConn. Here's a disturbing stat for you.  Besides the last two Big East BCS representatives (WVU and Cincy), which program has the best conference record over the past two seasons?  Yep, it's the Huskies (And Pitt & Rutgers to be fair).    If you ask Demond Conner at the Hartford Courant, the Huskies should be good for 9 wins this year.  To be honest though, unless their a much better team than last year, I don't see it.  The OOC schedule has a couple freebies (Ohio, Rhode Island) but then some very tough match-ups (@ frisky Baylor, North Carolina and @ Notre Dame).  They host Rutgers and USF but have to travel to Pitt, WVU and Cincy.  Like I said, I just don't see it.

That leaves Louisville and Syracuse and, let's be honest, neither has a realistic chance of winning the conference.  I do think the Orange can rattle off a couple conference wins but their schedule as a whole is too brutal for consideration.  And by all accounts, the Cardinals will be taking over SU's place at the bottom of the conference.  Traveling to Kentucky and Utah early on won't help matters.

At the moment, I think it's going to be a three-team race between South Florida, Pitt and Rutgers.  I think USF and Pitt will be the better squads but Rutgers will benefit hugely from their schedule.  Then again, it's May.  What the hell do I or anyone else really know?