Share All sharing options for: Where Syracuse Is A National Power And North Texas Is My Concubine

That would be on my television screen when I'm playing EA Sports NCAA Football.  There's few things in life more satisfying to me than taking Syracuse and turning them into a perennial national champion while also crushing the soul of North Texas football...and this is why I am the way I am.

The '09 version instituted one of the things I was dying for, an auto-game-finisher.  So many times when I'm up 63-7 at halftime against Rutgers, I've wanted to just end the game right there but had to play it through.  Now you can autoplay the rest of the game and move on.  Love it.

I'm still waiting on the ability to make changes mid-Dynasty.  Don't think that's coming in this version but hopefully soon.  Sometimes you can only stare at the same uniforms for so long.  You need a little spice.  A little variety.

NCAA Football 10 is coming and Cody was kind enough to send me this link which has all of the new stadium updates.  Alas, no updates to the Carrier Dome it seems. Since most of the changes seem to be about the scenery outside the stadiums, I guess that makes sense.  Still, I figured there had to be SOME changes, right?

So I called up some folks over at EA and they did share with me some very exciting, exclusive news.  Below are two new features specifically geared for Syracuse in NCAA Football 10:

At any given moment during a Syracuse football game, you will be able to see DOCTOR Gross in the background, on the sidelines, in the stands or possibly even wandering onto the field.  He's busy working those phones and finding his way into the camera shot at all times.  He's a real wheeler and dealer, just like in real life!

You can turn this feature on by going to the option menu.  In a nutshell, it's easy to lose track of time and waste precious seconds fretting instead of calling the damn plays.  That's where Coach Marrone comes in.  If you take too long to call a play, he shows up and begins menacingly staring you down while shouting threats of physical violence at you.  I guarantee you won't waste another second. 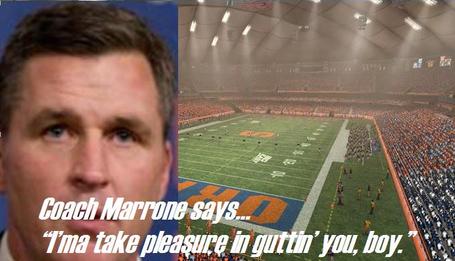 The folks over at EA have outdone themselves yet again.  I can't wait to start up a new dynasty as soon as I can.  Though, so help me God if by the third season North Texas is ranked #5 and playing in the Sugar Bowl.  If that happens...I will find you, EA, and I will hurt you.