Share All sharing options for: Everything's Coming Up Syracuse Lacrosse

Alas, not the NFL one but the MLL one.

The Major League Lacrosse draft was last night.  There was some strong opinion that SU would not only have the first player taken but also see a run of seniors taken in the first round.  Said opinions would be correct.

Kenny Nims was the first pick in the draft and he'll be joining the Chicago Machine (Aren't we done with team names that don't end in -s?  It's so mid-90's.)  He'll be joining former SU teammates Mike Leveille and Steven Brooks in Chi-town.  Defenseman Sid Smith went #6 to the Toronto Nationals, middie Dan Hardy went to the Denver Outlaws at #8 and Matt Abbott went right after him to the Washington BayHawks (you can never go wrong with the arbitrary-word-followed-by-Hawks approach).

No Orange were taken after that so it was a top-heavy showing for the national champs and an indication of the talent they will be losing this off-season.  As for whether or not the Orange will be able to retool and threepeat, well, it's gonna take a little work.

Statistically, the losses to graduation are fewer than last year, when Tewaaraton Trophy winner Mike Leveille, midfielder of the year Steven Brooks and several other starters departed. In terms of impact, though, they are much greater. When the stars of 2008 departed the core of juniors that remained - attackman Kenny Nims, close defender Sid Smith and midfielders Matt Abbott, Dan Hardy, Pat Perritt and Greg Niewieroski - was deep enough, talented enough and experienced enough to propel the team to another title.

Before they leave though, the seniors still get to enjoy their spoils a little while longer.  The team was at Manley yesterday to bring the school's 11th National Title to the Hall of Champions.  They even got a fancy cake! 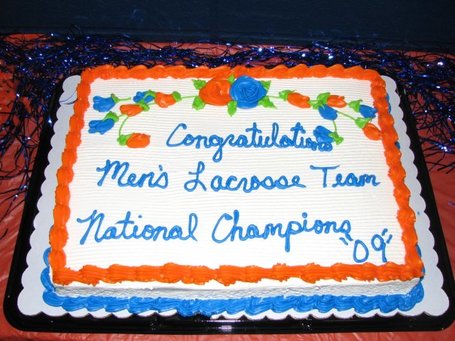 Tonight, the Tewaaraton Trophy will be announced and Matt Abbott has the chance to cap off another great season by bringing it back to SU.  He's up against Cornell middie Max Seibald, Duke attackman Ned Crotty, Virginia attackman Danny Glading and Bryant attackman Zack Greer.  Unfortunately, he's probably not going to win, though teammate Kenny Nims might have if he were eligible.  Still not sure how he wasn't nominated.  Former SU coach and lacrosse legend Roy Simmons Jr. will also be honored with the "Spirit of Tewaaraton Award."

While you await the final piece of the 2009 NCAA Lacrosse season, spend a little more time with the Orange.  I give you, The 2009 Syracuse Lacrosse Team: The Music Video: