Share All sharing options for: Jonny Flynn Wows With His Quickness, Eyes.

Chad Ford breaks down Jonny Flynn today over on ESPN.  It's an interesting read and even reveals a little nugget about how Jonny's diminutive height might actually have been a made-man accident:

Flynn blames his lack of size on an eighth-grade basketball accident. It was his last game playing junior varsity. He was driving to the basket. A defender pushed him in the back. He broke his ankle.

In the hospital Flynn got some of the most disappointing news of his life from a doctor. "He told me that the bone I broke was on a growth plate. He said there's a good chance I was done growing."

Flynn was frustrated because everyone else in his family is 6-foot-3 or 6-foot-4. Flynn lifts up his size-14 feet to prove that he should have been taller. "How many little guys have feet this big?"

How did that never come out before?  So if I hadn't sprained my ankle in 6th grade playing kickball I would have been a 6'10" power forward on the Knicks right now?

Flynn also shares his desire to play for the Knicks and also to play under coach Mike D'Antoni.  But the most compelling part of the peice has to be the image used above the article: 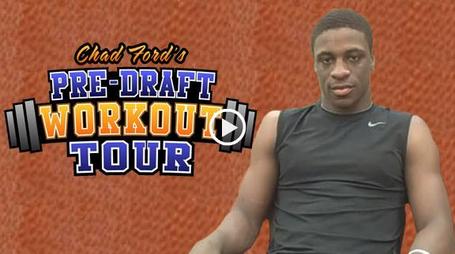 Jonny's either really tired, really high or really eying you up and down right now.  I'm a little concerned what kind of "pre-draft workout" he'd like to get into.

Chad has Jonny at #8 on his big board at the moment.  Paul Harris isn't in the Top 20 with him but Paul is starting to make his mark in team workouts.  Recently DraftExpress caught up with him and asked how things were going.

"My confidence always wasn't there at Syracuse, but now I think I'll get to be myself more."  Sums up The Paul Harris Era, unfortunately.  Question is, does Paul think that NBA coaches are going to shower him with rainbows and gillyflowers?  He knows they're mostly all from the Jim Boeheim school of scorn, right?  Regardless, DE has some high praises for Paul and his ever-improving chances to getting drafted:

Defensively is where Harris really shined, showing absolute lock-down ability on anyone he was asked to guard, and really making his presence felt with his combination of toughness and tenacity. The theme of this year’s NBA playoffs for us probably is just how incredibly physical the games are, and if there was any player that embodied that spirit in this gym, it was Harris.

Defensive tenacity and an uncanny 50 Cent impersonation...he truly can do anything.

As for Devo, no word from these or any other folks.  Anyone seen him?