Winning The National Title Is Great, But What About The Merch?

Share All sharing options for: Winning The National Title Is Great, But What About The Merch?

You like to think this weekend's lacrosse national title was about the student-athletes and the perseverance and will to win.  You are, as usual, wrong.  It's about selling T-shirts, dummy.

SU Athletics can merch with the best of them and they were ready to go yesterday.  Check out the athletics' website and you'll be greeted by a graphic celebrating Syracuse's win.  Click on through and it'll take you to the team shop where you can buy any number of championship items.

There's the 2009 Champions T-shirt.  Or maybe you want the hat?  It's never too early to pre-order the DVD, which I hope will include some commentary by John Desko wherein he speaks sternly in short, choppy sentences, like he does in my dreams.

"The DVD is being produced by Roger Springfield and will feature highlights, interviews and behind-the-scenes footage from the Orange's national championship season. Cost of the DVD is $19.98.

I prefer the Back-To-Back T-shirt myself, which has the scroes and opponents from this and last season's national title games.  Especially considering it doesn't make any sense whatsoever.

Good eyes to reader Nicholas who noticed a rather incorrect result on the back of the shirt. 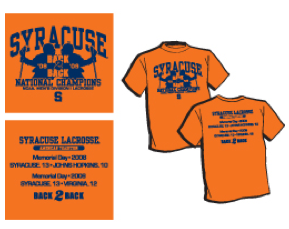 Weird, I could have sworn we played Cornell, not Virginia.  So the obvious answer is that they just threw up a likely scenario, Cuse against Virginia, and a fairly reasonable score, and they'll swap it out on the real thing.

But I like to think what really happened is this...a man woke up Friday morning in a cold sweat.  He had just awoken from the most realistic dream he ever had in his life.  It was like he was there, in Gillette Stadium, to see Syracuse defeat Virginia 13-12 for the 2009 National Title.  It was so real, the visions, the smells, the feeling.  This was undeniable...he had seen the future.

He immediately went to Manny's and begged to meet with the owner.  Once there he implored him to begin making the T-shirts now for the impending championship in order to take advantage of being the first mover.  All the man asked for in return was a small percentage and an agreement that whenever he had a vision of a Syracuse championship in the future, he would come to Manny directly in order to capitalize on it.  Manny decided to make 50,000 T-shirts with the Virginia outcome on the back right then and there.

But this man wasn't done.  This was no mere parlor trick.  This was a gift from God.  And he needed to take full advantage of it.  He loaded up his 2002 Dodge Stratus and booked it to Turning Stone Casino where he promptly laid down his net worth on Syracuse and Virginia to win in the semis.  There was no doubt.  He had seen it happen.  The world was now his oyster.

And sitting there on Saturday afternoon, watching Cornell dismantle Virginia like an engine,  I like to imagine that the last thing that went through his head, other than that bullet, was to wonder how the hell Andy Dufresne ever got the best of him.

Update: Alas, truth is not stranger than fiction.  From the T-shirts designer..."I used Virginia for the mock to get pre-approval, based on the way they have been playing... I didn't think Cornell could beat them.  The shirt is now available online with the correct opposition and score."  A fair assessment and a fair explanation.  Whatever's on the back, just go buy the thing, will ya???