All due respect to Cornell, but Orange was the color of the day as the Syracuse lacrosse team won it's second-straight National Title on Monday in one of the most thrilling finishes in NCAA history. Seriously, did you watch those clips?  Is there anything I can add at this point that will better illustrate how amazing that finish was?

With four seconds remaining in regulation, Nims scored on a desperation pass from midfielder Matt Abbott, eliminating a three-goal deficit in a little more than three minutes and sending the game into overtime. The shot eventually propelled the Orange (16-2) to a thrilling 10-9 victory over Cornell (13-4) in the national championship game here Monday at Gillette Stadium in front of 41,935 fans. Cody Jamieson had the game-winner 1:40 into overtime.

That outgoing senior Kenny Nims and new star Cody Jamieson were the goal-scorers of record for the finish just makes the torch-passing even sweeter.

We'll talk more tomorrow but in the meantime, get up to speed: 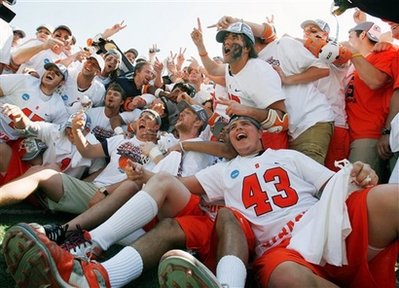