Rochester got The Doug Marrone Experience yesterday as Doug showed off that shoulder cannon again.  This time, he threw out the first pitch for the Rochester Red Wings, and did a much better job than Gary Dell'Abate. 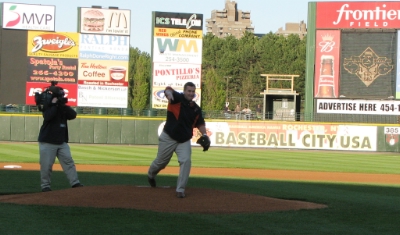 They say there are only a few objects noticeable from space.  The Grand Canyon, the Himalayas, the Great Wall of China and Doug Marrone's thighs.

Doug's message is simple. Syracuse football is coming back and you better get in on the ground floor now cause there won't be room on the bandwagon in three years:

"They tell me, 'I used to have season tickets,'" Marrone said Monday from Frontier Field, where he signed autographs and threw out the ceremonial first pitch before the Red Wings-Charlotte Knights game. "And I tell them the same thing: 'You'd better buy them now.'"

Of course, not everything Marrone says is golden.  Even he is prone to misstep:

Blech.  He'll get a chance to see some future Yankees when the tour wraps up in Scranton.  He'll be throwing out the first pitch at the Scranton/Wilkes-Barre Yankees game against the Columbus Clippers.  Fingers crossed Gerry McNamara meets him at the mound to form a Voltron-esque Syracuse robot to rule the Northeast.

But before Doug can make it to Scranton, the Whistlestop tour is taking a detour.  Today through Thursday, Doug will be in Los Angeles for many a meet-and-great with donors, alumni and fans...and of course a special one-on-one with your truly.  I appreciate all the questions you guys sent over.  Some good ones in there I will use and some...less than good ones I will not use.  You know who you are.

I'm also curious to take a look at this trip as an education is how important the West Coast is to Syrause Athletics.  it's not like New York City but LA is home to a large amount of SU alums, many of which are involved in world-shaping entertainment, sports and business companies.  What does it mean for a football program like SU to have strong ties with these alums and what can their influence do for the program.  I'll attempt to get some answers.  Maybe Aaron Sorkin is available.