Which Syracuse Hat Will He Choose?

Share All sharing options for: Which Syracuse Hat Will He Choose?

We don't have enough "recruit press conferences with Syracuse hats on the table" so I applaud Shane Raupers, his family, his coach and a large percentage of the Athens High School faculty for this photo op of Shane signing his LOI to play for SU: 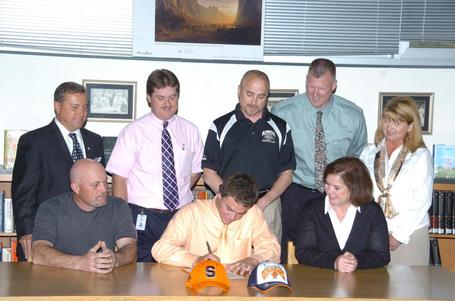 Now we just need one of those "which hat will be choose" kind of press conferences where the recruit picks up the West Virginia hat, pauses, puts it down and then puts on the Syracuse hat and we'll be back in the big leagues for real.

Shane seems extremely excited for the opportunity to come play for the Orange.  Even though he'll be coming on as a kicker-only, he's got the skills to pass and run if the Orange ever feel the need to take advantage of them, like say on a fake...

"I think coaches like that I might be able to do some trick plays, that I can do something with the ball if I had to, I’m not just a kicker, I’m an athlete."

Shane's looking forward to playing in the Dome and taking on some top-level talent, including Penn State, whom he used to root for:

"I always was a Penn State fan, but they kind of brushed me off a little bit, so I kind of soured on playing for them," Raupers said. "It’s a dream to get a chance to play there though, 110,000 fans, it’s going to be crazy."

I smell a last-second redemption field goal to win the game coming on...maybe not this season.  But, you know...eventually.