Rabbobank Arena, The House That Gerry McNamara Built, will go silent next basketball season.  The NBDL's Bakersfield Jam are ceasing operations.  With them, die the dreams of many great things.  We'll never know if the team would have retired Gerry McNamara's jersey.  Sure, he only played there for 41 games and averaged 10 PPG, but, you know...

Don't be fooled by the business and political jargon, says team owner Stan Ellis.  It's important to understand exactly what's going on here:

Glad we cleared that up.  Oh and then there's this:

Palm said it was discussed to actually put the team up on eBay, but they decided not to.

No word on when the firesale will begin but if you're in the Bakersfield area, you might want to camp out near the Jam HQ just in case they start loading up the dumpster.

One thing the Jam haven't ceased is their online advertising.  Which is unfortunate, given the content they're currently sponsoring: 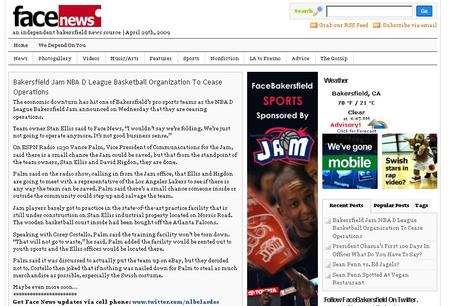