What I'll Miss Most About Paul

Share All sharing options for: What I'll Miss Most About Paul

Paul Harris came to Syracuse in 2006 as a five-star, can't-miss recruit out of Niagara Falls.  He seemed destined to be the centerpiece of a Final Four team before he left.  Instead he leaves as...something else.  Under those circumstances it's easy to peg Paul's time here at Syracuse as disappointing but I don't think it's fair to keep him to those initial expectations.

As soon as his freshman season we knew Paul wasn't going to be the megastar he was supposed to.  We thought he would become a very good player who put up consistent numbers and he didnt really ever reach that level, to be fair.  But Paul did provide us with some memorable moments and flashes of brilliance, enough to excuse the lapses in judgment that he made from time to time and landed himself on the bench next to Jim Boeheim so often.

I'm sorry Paul didn't get to fulfill his guarantee.  You know, that if Syracuse played Pittsburgh again this season we would have beaten them.  I'd like to think Paul would have made good on that promise.  That the mythical 30-point, 18-rebound Paul Harris game we knew was lurking below the surface would have emerged.  Instead, Pitt will always go down as his nemesis.  He never got to beat the Panthers and whenever people think of Paul Harris and Pitt, they will always think of that god-damn inbound pass.

Paul's worst on-the-court moments where when he was forced to create for himself (like on inbound plays).  Paul just lacked that ability that Jonny Flynn or even Eric Devendorf possess.  Instead, Paul was always a finisher.  I always like to say that Paul is the kind of player who would get 14 points and 12 rebounds and you don't quite remember how it happened.  Along with Kristof!, he was SU's garbageman.  And don't let the name fool you, every team needs a good garbageman.

That's not to say Paul couldn't make some amazing plays.  Whether it was dunking so hard his shoes ended up over his head or finishing a crowd-pleasing alley-oop, Paul Harris made some great things happen on the court:

But I think what I'll miss most about Paul is what happened off-the-court.  Paul was, and is, a character.  And good characters are hard to come by.  Jonny Flynn is the good guy.  Eric Devendorf is the villain.  Andy Rautins is, possibly actually alive.  But Paul was always the one you could count on to make things interesting.  He was emotional and he wore it all on his sleeve.  He rarely held back, because he couldn't.  He wasn't a mythical hero, he was a human being and I think SU fans appreciated that.

He also wore horrible, horrible clothing on his sleeve. And not just there...all over his person: 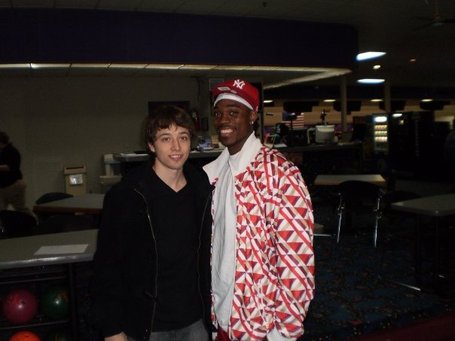 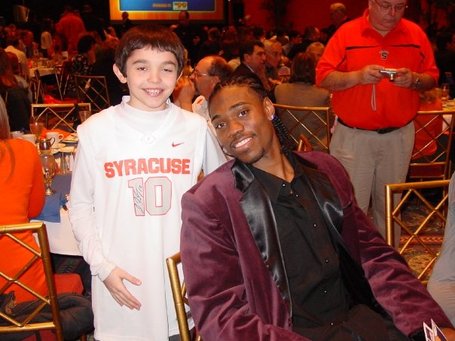 Paul Harris leave Syracuse 34th all-time in scoring, 14th all-time in rebounding and 31st all-time in assists.  But I don't think anyone will remember his time at Syracuse for stats.  What they'll remember is the kind of guy Paul is.  Fun.  Passionate.  Playing basketball the best he could under extremely crushing expectations and the stern, taskmaster that is Jim Boeheim.  And leaving early due to those things.  Most of all, we'll remember the things in the two videos below.  For Paul's sake, that's much better than remembering him for the purple suit: