The Passing Of The Striped Shirt Torch

Share All sharing options for: The Passing Of The Striped Shirt Torch

On the final home game of the season, Syracuse fans asked for one thing and one thing only...striped shirts on our redshirted players.  Sadly, it seems as though Scoop Jardine and Wes Johnson disappointed.  HOWEVER, someone else has lifted high the stripe-y scepter and wields it with a mighty fist. 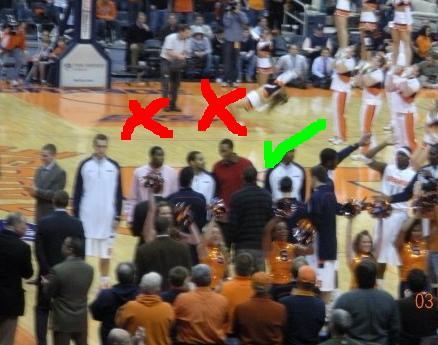 Is that Mookie with the black shirt and white stripes? If so, it means that although he spent only a few weeks on the bench, he's alert and open to adaptation.  It bodes well.

A plain, single-color dress shirt, Scoop? Have you no respect for the game???  Well, at least you didn't tuck in.  This isn't a country club, after all.

It's not stripes but Scoop's checkered shirt does at least contain some sort of design based on symmetry.  So I guess that still counts.