Not everyone can be as humble and mature as Andrew Robinson.  The former starting quarterback certainly never would have believed he'd end his career at Syracuse fighting for playing time at tight end, but as he's done his entire career, Robinson will do what is asked of him and not complain.  Unfortunately, it looks like there's a few folks out there not quite ready to take one for the team:

On Friday, Donnie noted that redshirt freshman WR Trey Fairchild and RB Jeremiah Harden were no longer with the team.  When questioned about their departure, Doug Marrone said a lot with a little:

"People like that"?  Oofa.  Don't pee on Doug Marrone's leg and tell him it's raining, if you catch me.

Both players were wiped clean from the SUAthletics.com pages as well.  So much for drawn-out goodbyes.  Except...there's one person who didn't get the memo about Fairchild's removal from the team...the guy who runs the homepage poll: 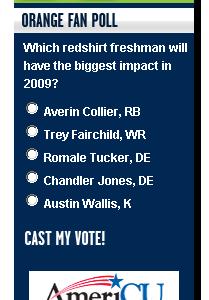 Just in case you're wondering, Fairchild is currently leading the vote.  Of course he is.

Turns out we should be keeping a very close eye on the team roster every day and it continues to get trimmed.  Today it's CB Matt Reid:

A school official said Reid informed the staff today he no longer wanted to be a part of the program.

Alrighty.  Donnie also notes that walk-on kicker John Barker has been shuffled loose, leaving only two kickers on the roster: punter Rob Long and kicker Autin Wallis. At least two guys on this team have some job security...

Donnie also reminds us that the attrition of players is an unfortunate reality of a coaching regime change.  Guys who were promised a chance under the former only to see the latter come in and push them back down the depth chart are naturally going to feel gipped.  Just ask Rudy.