This Isn't Going To Make Your Week Better, UConn

Share All sharing options for: This Isn't Going To Make Your Week Better, UConn 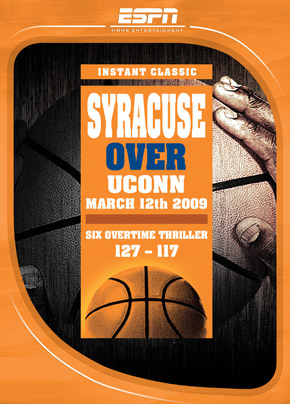 The Epic Game comes to Epic DVD (what, no Blu-Ray?):

In one of the most dramatic games in college basketball history, the Syracuse Orange upset the University of Connecticut, 127 - 117, in six overtimes in the quarterfinals of the 2009 BIG EAST Tournament. When instant replays denied Syracuse a last-second victory at the end of regulation, so began the longest game in BIG EAST Tournament history and the second-longest Division I game on record. Both teams played a remarkable 70 minutes of game-clock basketball, only 10 minutes short of completing two whole games. The Orange fought back from a deficit in each of the first five overtimes forcing more play, and took the lead for good in the opening seconds of the sixth extra session. Ending at 1:22 a.m., the contest took 3 hours and 46 minutes to play. Of the combined 244 points, 102 came after the regulation buzzer. An instant classic, the game has already entered college basketball lore.

"70 minutes of game-clock basketball?"  Was there some confusion in the marketplace as to whether or not this game was played after 1957?

Only $19.95 each folks.  Or, as commenter sportzbelle put it, "give it a few hours and it might be marked down."  We know how this works, SU Athletics.