Own Yet Another Piece Of Syracuse History

Share All sharing options for: Own Yet Another Piece Of Syracuse History

You bought the T-shirt.  Then you bought the framed boxscore.  Then you bought a piece of the Carrier Dome floor.  You wanted a signed basketball from the UConn game and you got it.  You even wanted something a little...closer to the action.  But now, we are proud to present you with one of the rarest, hard-to-come-by, must-own items that every Syracuse fan is going to want to "reach out and grab." 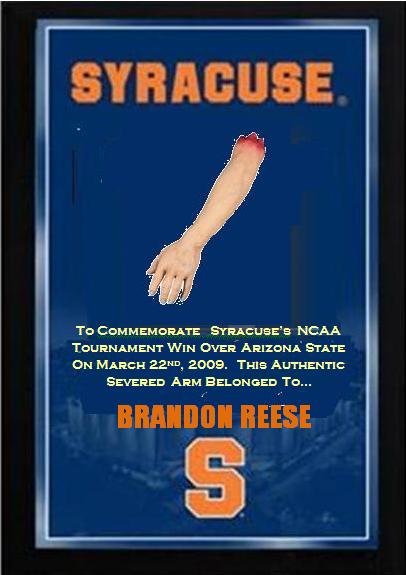 After Syracuse's memorable win over Arizona State, bench player Brandon Reese was informed that his services will almost certainly no longer be needed for the rest of the season.  As such, his arms, which saw action in the epic 6 OT win over UConn and SU's first NCAA Tournament win in five years, became instant collectibles.  Brandon was lovingly held down by four experts restrainers and his arms were delicately hand-cut away with the precise eye of a true carpenter.

Now that arm can be yours for the low price of $499.99! The bloodied stump of an limb has been sealed onto the marble plaque and covered in a lacquer varnish so bright you'll have to put on sunglasses whenever you admire it.  Hang it in your office.  Hang it in the TV room.  Hang it as a keepsake in the parlor room and show off your exclusive keepsake to jealous friends.

How exclusive is it?  Only two left in stock.  You can't get much more exclusive than that!!!

But that's not all.  For only $799.99, Jim Boeheim will sign the arm himself AND leave a teeth imprint in the soft, fleshy bicep of Brandon's arm.  A game-used limb AND Jim Boeheim's teethmarks.  This truly is an offer no die-hard Syracuse fan turn down.

A Syracuse-Steiner letter of authenticity is included with this lifeless, rotting appendage.  ACT NOW!