Share All sharing options for: We Talkin' Bout Practice

Who has two thumbs and is about to run your asses through the most painful and soul-crushing practices you've ever done in your lives? 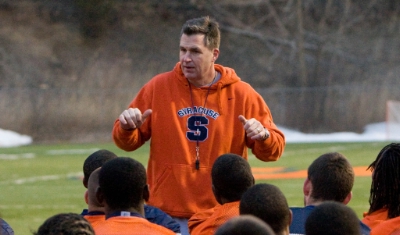 The Doug Marrone Era may have technically started with the signing of his contract and the press conference introduction, but it doesn't REALLY start until the Orange take to the field for the first time under his steely gaze.  And that would be Monday.

The Orange will take the field for the first time in the Doug Marrone era on Monday, March 23 to kick off Spring practice. Fans are invited to come out and watch the Orange as it prepares for the 2009 season. The annual Spring game is set for Saturday, April 18 at 1:00 p.m. in the Carrier Dome. Admission is free. Practices will be held at the Katz and Schwartzwalder Practice Fields behind Manley Field House, weather permitting. In the event of inclement weather, practice will be held at the Carrier Dome.

Donnie has a fancy color-coded schedule for you to follow if you're thinking about stopping by.  Be sure to wear full pads and a helmet if you go, just in case Marrone looks up at you in the stands and yells, "Hey you!  Matt Glaude!  Get in there at linebacker and show them how to do it!"  Assuming you are Matt Glaude.

You may want to take advantage of watching the Orange for free, especially if you're a student.  Despite the fact that ticket prices have fallen, student tix are still the priciest in the Big East, according to the D.O.

At $115 per student, Syracuse is the priciest among Big East teams that offer season-ticket packages for its students, despite reducing its prices for the 2009 season. SU rests $33 dollars above Louisville, the second highest on the list. Rutgers, Connecticut and Pittsburgh round out the conference at $77, $42 and $25, respectively.

To be fair, even though the price stays the same, it includes two more home games.  So it's a better deal for sure.  Just too bad student ticket price isn't in line with on-the-field success.

As for whether or not that on-the-field success will come this season, Brian Bennet concludes that the it's gonna be tough with the hardest schedule in the Big East.

The Orange do have eight home games, but they also have Penn State, Minnesota and Northwestern on the nonconference slate. That's a tremendous trio.

Not surprisingly, Rutgers has the softest schedule in the conference.  Gotta get back to the PapaJohns.com Bowl somehow, I suppose.