Share All sharing options for: That'll Do Cuse, That'll Do

I can certainly understand why Jonny Flynn buried his face into his lap at the end of last night's contest with Louisville.  With the game slipping away, the perfect ending was slipping away as well.  The thing he and his teammates fought so hard and came so close to achieving wasn't going to happen.  The underdog had finally met it's match in the Big East regular-season champion Louisville Cardinals, who played every bit their reputation in the second half, and the Cardinals ended up spoiling the storybook ending, beating the Orange 76-66 in the BET finals.

Jay Bilas' prophecy finally came to pass.  Syracuse's bodies began to give out of them. Crisp passes turned into easily-intercepted lobs.  Gimme lay-ups were anything but.  Their broken-down bodies unable to quite keep up with the athletes on the other side of the ball, who were "rested" in comparison. 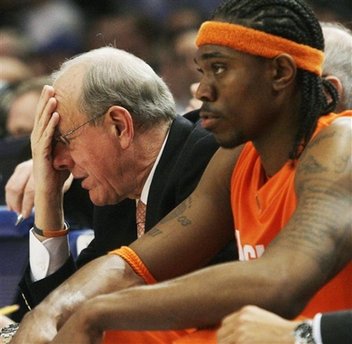 All of that said, there is no shame in this loss.  Anyone who doubts the desire of the Orange to win this game clearly didn't watch and clearly hasn't been watching the Big East Tournament at all.  The Orange were running strictly on desire in the 2nd half.  It's all they had left.  And when Jonny Flynn went to the bench with a little over a minute left, the game finally out of reach, all that unfulfilled desire bubbled over.  And no one can blame him.  We would have buried our heads too.

Kudos to the Cardinals who looked every bit the probably NCAA 1-seed.  They came into the BET as the "other" good team and they left as the one that likely replaced UConn in the national standings.

In the moral victories department, Jonny was named Most Outstanding Player of the BET, only the fourth player from a non-winning team to do so. It was well-deserved:

Flynn didn't move for a few moments. He stood at midcourt, his hand over his eyes, his head shaking, and started the slow walk back to the bench. There Flynn sat, huddled between assistant coaches Bernie Fine and Rob Murphy, his head in his hands, unable to even watch the closing seconds of a 76-66 loss Saturday night.

That's how the No. 18 Orange's surprising run here at Madison Square Garden ended: Its best player, the tournament MVP, sitting in the third seat from the scorer's table as the two squads shook hands at center court. Flynn said he stayed in place down because he was disappointed his team couldn't finish the job. But by that point, it looked like he was simply too exhausted to move anymore.

Harris might have won the MVP but it was Eric Devendorf who broke a record.  The record for points in a single Big East Tournament (84), beating the old record of 81.

Is it me or did KO actually come stronger afterwards?  Mr. Intangible must've knocked an extra boost loose.  He was a passing, rebounding and hustling machine.  Let's drop this guy on his head from large heights more often...

At the end of the day, we (and the nation) learned a lot about this Syracuse team.  Namely:

Here's some other thoughts from around the Interweb.  We'll find out what the ORange are seeded and where they'll play around 6pm ET tonight.  Let the "does Syracuse have anything left in the tank" discussion begin and continue ad nauseum for the next four days.