Actually, I Think They're Still Playing...

Share All sharing options for: Actually, I Think They're Still Playing...

Goodness, where does one begin?  Couple thoughts of my own before we check the Interwebs:

Speaking of Thomas, fantastic nugget from Pete Thamel over at the NY Times about the most important thing Justin Thomas could have done before entering the game:

Soon after he entered the game, Thomas looked over to the Syracuse bench with a panicked look on his face.

Hopkins grabbed a piece of Big Red and handed it to Syracuse reserve center Rick Jackson, who passed it on to Thomas.

"When you get nervous in certain situations when you first get in, you get real dry, like cotton mouth," Hopkins said.

GET THAT MAN AN ENDORSEMENT DEAL NOW!

Now to the Webersphere.  Such an epic game is going to inspire some epic-esque sports-writing.  Who wants to take a stab at it?  ESPN's Dana O'Neil...go!

Epic? Classic? Not good enough -- not for a six-overtime game where skill gave way to will somewhere in the third overtime and will gave way to survival by the sixth.

The Syracuse Orange turned to pulp.

"History," Jim Boeheim said. "That was the greatest game in history."

You could make that argument. You really could. You could argue that Syracuse University's 127-117 survival of the Connecticut Huskies at Madison Square Garden was grander than anything ever played by the college boys. And nobody would laugh.

More important, what did Jimmy B have to say about things?

I've never been prouder of any team I've ever coached."

Word.  Seriously, I'm just linking from here on out.  I don't have the energy.  If I missed anything, please e-mail me and I'll add.  I'm too old for this sh*t. 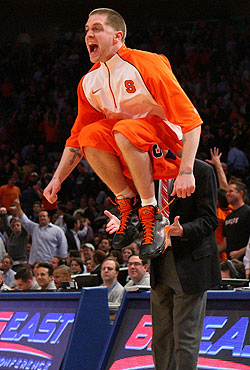