The Brawl With The Hall

Share All sharing options for: The Brawl With The Hall

Firs things first, we need to admire this photo for his 100% awesomeitude: 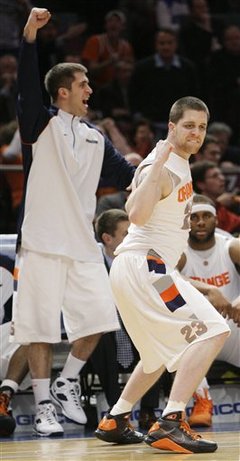 My favorite part?  AO in the background.  Even then, he's uninterested.

So much drama in the second half last night, the game should have been broadcast on TNT.   Just in case you somehow missed it, here's the events leading up the scuffle and the actual scuffle itself:

Had a chance to re-watch it again after last night's post and wanted to add some thought:

1. Sorry, Hall, but I LOVE that you turned us into a bunch of swaggering f***ers.  We needed that.  First time in a long time this team played angry but even more importantly, they played angry and they harnessed it.  Those three-pointers were daggers.  The defense was smothering and erred on the side of feisty.  Just what we needed going into the UConn game.

2. As for Bill Raftery, Doug Gottlieb, Rece Davis and everyone else who said "Hey Syracuse, it's just Seton Hall" during and after the game, you might as well have said "Wait, is this basketball?"  CLEARLY, you don't understand the Big East.  And to extrapolate, you don't understand the meaning of rivalry.  You expect these guys to go out there and fight, claw and scratch.  You want Seton Hall to fight for their very post-season existence and you want Syracuse to fight for it's seeding and national recognition.  But you don't want or expect the game to get heated?  Wake the f*** up, get off your high horses and come back down to Earth. If these games AREN'T this heated, something's wrong.  i'm not saying it should always come to fistacuffs but you can't tell me how intense the BET is in your pre-game show 47 times and then complain about the intensity after the fact.

3.That said, yes, Arinze, the clapping was dickish.  I like you better when you just scowl in the corner.

4. Kristof! got ejected a few weeks back for an errant elbow.  No one gets ejected in this game!?!?  I'm not complaining but, I'm thinking maybe KO's ejection seems even more unwarranted now.

But don't take my word for it, take it from people who were there.  Like Jameson, who's been a Twittering machine all week.  Jameson agrees that this was a fine example of passion on the court, especially from young master Devo:

While the red-shirt junior guard has had some questionable behavior off the court in the past, he's right when it comes to these actions on the court. Devendorf plays because of his passion to play and win.

That's what college basketball is about. Devendorf's emotion was targeted towards his teammates and his fans. He didn't get up into Seton Hall's face after the storm of three-pointers he drilled.

Especially once you get into the post-game interviews you realize how cathartic an experience this was for Devo.  He's blunt and honest about how crowds seem to feel about him ("When they announced I got a technical, I heard the crowd cheer loudly.  I know people don't like me.")  Devo talks even more candidly in this video from the D.O. Sports Blog:

Yeah but you're our a-hole, Devo.

But what about the way Devo acted after the skirmish?  Was it appropriate?  Brent Axe doesn't think so, in fact he thinks Devo's behavior was downright embarrassing:

Eric Devendorf's behavior in this game was just unacceptable. I know these are college kids, but that is a lame excuse here.

I'm not talking about the incidents with the technical fouls .Its one thing to get caught up in the emotions of a fight with someone right in your face and you are defending yourself. But it is quite another to act like an immature 5th grader for the rest of the game after that.

Devendorf talks trash all the time, but he took his immature act to a new level in this one.The constant talking, staring, pounding on the chest, and other showboating after the technicals was just bush league and, frankly, makes the rest of the team look bad. Especially in prime time on ESPN.

Brian over at Orange44 wasn't a fan either but laid the blame evenly between Seton Hall and Syracuse players:

Now to the extra curriculars. This was not acceptable by either team. But I will say that it was John Garcia of Seton Hall that initiated the technical fouls by giving the old jibba jab after he was cleanly blocked by Onuaku, but Onuaku was clearly wrong by clapping in his face. If he wanted to clap and walk away that would have been fine, but right in the guy’s face definitely earned a tech. As for Devo and Eugene Harvey, that was ridiculous. While I expect that from Devendorf, putting your hand in another mans face and shoving is unacceptable. Devendorf never put his hands on anyone in that scrum, but Harvey had his hands all over Devendorf’s face and he should have been ejected for that. Either way, it was fine that they both got technical fouls again. It probably helped in that it motivated Syracuse out of a lull and spurred an offensive run.

Fair enough.  Probably could have done without some of the taunting.  But I still say it was nice to see some swagger out of these guys.  To parahprase Denny Green, "Devo is who we thought he was."  We can't be shocked he reacted the way he did, we knew this is exactly how he'd react if ever put in this situation, didn't we?