SU Huggins-ed It Out (Sorry)

Share All sharing options for: SU Huggins-ed It Out (Sorry)

When it came time, Devo and Flynn (which sounds like a failed 80's supergroup) came through in the clutch:

The Syracuse backcourt duo of Flynn and Devendorf had just scored seven points in a span of 52 seconds, ballooning the Syracuse lead to 19 points and leaving the Mountaineers stunned. The No. 20 Orange (18-5, 6-4 Big East) went on to top West Virginia (15-7, 4-5), 74-61, in front of 21,069 fans at the Carrier Dome Wednesday night behind 44 combined points (22 by each) from the resurgent guard tandem.

It was a return to form all around, not just for Flynn and Devo.  How bout Kristof?

The image of Ongenaet most fans have in their head does not involve him blocking threes, but sure enough, he got out on the perimeter, blocking a long ball in addition to a swat on a Da’Sean Butler layup. He also had a thundrous dunk on an assist from Paul Harris that brought the crowd to its feet. You could say that he was the noise to Devo and Flynn’s funk.

And what about Paul "LeBron meets Dwight Howard" Harris?:

Harris awoke from a three-game slumber at the opening tip, and West Virginia had no answers when he crashed the boards, notching a double-double about a minute into the second half. I wouldn’t go as far as Doris Burke went and compare him to Lebron James AND Dwight Howard (really, Doris?), but he definitely appears to be back.

This was an important win.  We wondered beforehand if it was a must-win.  Axe thinks it was.  He also thinks we saw Paul Harris step it up to another level:

Paul Harris finally got back to being the "play like your hair is on fire" Paul Harris. He came out and provided the early spark for a team that needed one. It was no coincidence that his recent funk went right along with the team's three-game losing streak coming into last night's game.

What we saw last night is the Paul Harris this team needs to be successful. I made the point on the radio on Wednesday that it was critical for Paul to come out and set an aggressive tone not only to rebuild his confidence and his team's confidence, but to counter the scrappy and aggressive play West Virginia is know for.

It was nice to see the team having some fun out there.  And afterwards, the feel-good atmosphere looked contagious.

But at the end of the day, it all comes down to one thing.  Did Eric Devendorf get photographed in awkward, seemingly homoerotic ways?  And the answer is...yes. 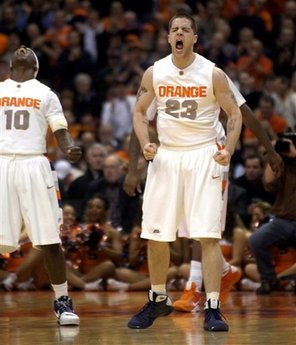 I'm not sure if this immediately following a deuce or just before one. 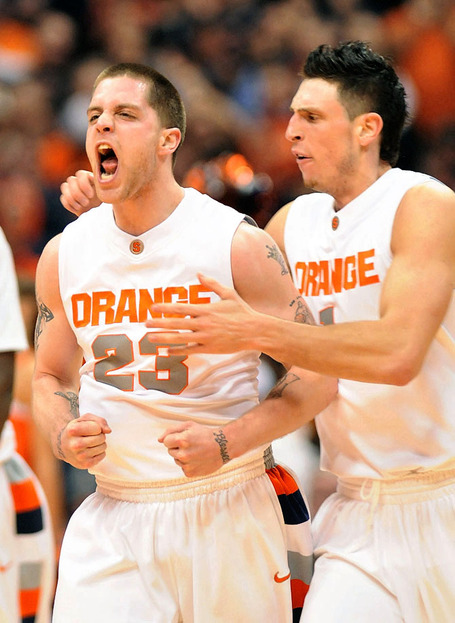 I'm actually more concerned about Rautins.  He looks like he's about to force Devo to do something whether he wants to or not.

By the way, while we're checking out game photos...when did Andy Bernard join our coaching staff? 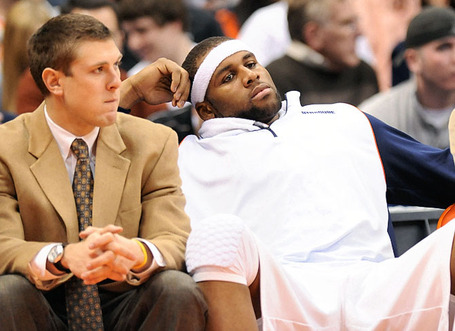