Share All sharing options for: Wes Johnson Has Picked Up The Striped Shirt Torch And Is Carrying It Proudly

I don't know when it happened but at some point in the last couple weeks, Scoop Jardine went shopping.

My guess is that the Crazy Yellow On Orange Stripe Incident Of 2009 sent shockwaves throughout the Syracuse Community as well as Scoop's friends and family, all of whom urged him to look into basic patterns and bolder choices.  The redshirt who only wore striped shirts looked out on the world with fresh eyes and said to himself, "there has to be more out there for me...and Abercrombie & Fitch."

And so, his recent attire has been more...solid.  But just as Scoop had laid down his ceptor and renounced his crown as King of Stripelvania, another redshirt player has stepped up to succeed him.  Wes Johnson is that stripe-shirt wearing man: 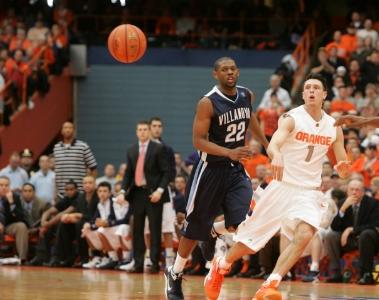 That's Wes standing in the black and white stripe ensemble.  And there's Scoop, wearing what looks to be a plain, black shirt, seating below him and blending into the background.  Good night, formerly-striped prince.

One issue though with Wes, and it's a minor violation really.  Me thinks we've seen him wear that shirt before.  Wes, Wes, Wes...don't you read Cosmo!?!?  NEVER wear the same polo shirt while sitting on the bench during a college basketball game TWICE!  It's just so...gauche.