The Four Faces Of Syracuse Football

Share All sharing options for: The Four Faces Of Syracuse Football

Couple weeks back we tried to figure out who was on the Syracuse Sports Mount Rushmore (as well as who was on the bizarro version, Mount Cuseless, if you will).  Brian Bennett over at ESPN took a stab at trying to figure out the football-only version.  I think, based on the thoughts of most SU fans, he got it right:

• Jim Brown: Probably the first name you think of when you hear the words "Syracuse football," and with good reason.

• Ernie Davis: The only Syracuse player to have a movie made about him, the first African-American Heisman Trophy winner belongs on this list.

• Floyd "Ben" Schwartzwalder: The legendary coach notched 153 wins in nearly a quarter of a century at the helm of the program.

A couple names probably spring to mind that also warrant consideration...Vic Hanson, Wilmeth Sidat-Singh, John Mackey, Art Monk, Marvin Harrison.  But at the end of the day, I think you have to go with these four.  Brown and Davis were good enough to make our all-sports version of the wall.  Schwartzwalder is the coach that turned SU into a national championship program and oversaw Brown, Davis and many other Hall-of-Fame players walk through the door.  And McNabb is the consummate "modern era" Syracuse player and the best SU player of the Big East Era.

So taken with McNabb was Bennet that he added him to the Big East Football Mount Rushmore as well, alongside Mike Tranghese, Miami and Pat White.  This one's probably up for dissection a little more.

This all speaks to McNabb's greatness but nothing really says "legend" like having your jersey worn on a short-lived WB sitcom.  Colin W. sent this link over for tan episode of he TV show "Smart Guy" in which one of the cast-members is seen wearing an SU McNabb jersey (3:25 mark).  Obviously, the most important question in all of this is...why was Colin watching an episode of a sitcom that went off the air in 1999 in the first place? 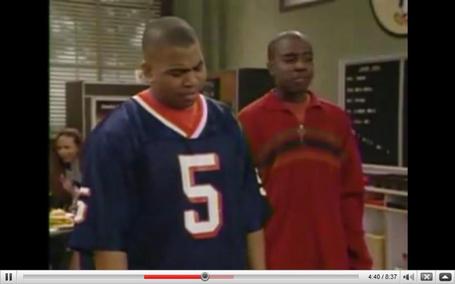