Monday Look Back: Xavier fails at math, Gonzaga fails at basketball - NCAA Division I Mens Basketball - CBSSports.com
Wesley Johnson has long been declared the nation's most impactful transfer. He deserves that title.

As Greg Paulus may have his eyes on the NFL Draft, the yippers are about to yip some more | Bud Poliquin -
"Me? I loved the Paulus experiment. I believe it bought needed time for Ryan Nassib (if, indeed, Nassib is next in line as the Orange quarterback). I believe it added some pizazz to a program that had fallen somewhere between football dormancy and football irrelevancy."

Three Idiots on Sports: Stalking is a Crime Bud
Bud likes Greg more than Mel likes Flight of the Conchords. I fully expect Greg to be at the family home opening Christmas presents on Friday morning and Bud will be peering in the window taking photos. It's getting creepy at this point.

Mike Waters Podcast | The Axeman - Brent Axe -
What happens when you team up the beat reporter for SU Hoops for the Post-Standard and a lowly blogger/radio host? Podcast magic my friends. Podcast magic.

Vox Populi " The 10 best Georgetown-themed holiday gifts
A "Got Georgetown?" sticker is one of them? Are Georgetown people living in 1996?

Titans LB Keith Bulluck Tears ACL, Will Miss Rest Of Season - SB Nation
Bad news for the Tennessee Titans: linebacker Keith Bulluck will miss the rest of the season after tearing his ACL during last week’s win over the Dolphins, according to The Tennessean.

Even Derek Jeter wants you to Shut It Down (H/T: Coach Murph): 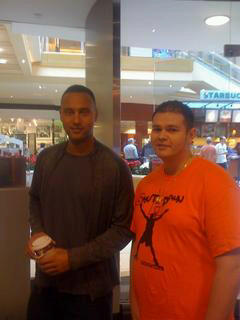