It was a game with far more excitement than it had any right to have.  An underdog sticking with the No. 5 team on its own court, heated words, a nut shot, an ejection and an injury.  When it was all said and the done the Orange improved to 11-0 with a 85-72 win over St. Bonaventure (6-4).

Rick Jackson recorded a double-double with 18 points and 10 rebounds to go along with three steals and three blocks, as fifth-ranked Syracuse defeated St. Bonaventure, 85-72, at the Carrier Dome.

"I don't expect teams to be afraid of us anymore," Joseph said. "We are number five in the nation, but teams aren't going to be afraid. They want to beat us even more now than when we were unranked. Teams are going to come at us a lot harder so we are just going to come out with that in mind."

And it seems they'll use any trick in the book to do it, including groin punches.

The Bonnies were on offense and as center Andrew Nicholson moved through the lane, he delivered what Rautins described as a low blow to a sensitive part of Rautins’ anatomy.

Rautins crumpled to the Carrier Dome floor and immediately pointed toward Nicholson. Officials stopped play to congregate at the scorer’s table and watch what happened on a televised replay.

Moments later, Nicholson was ejected. He trotted down the tunnel that led to the St. Bonaventure locker room and spent the rest of the game there.

Rautins ended up missing both free throws.  Well I would think so...that's the least of his worries in a moment like that.  Nicholson still managed to lead the Bonnies in scoring despite the ejection. 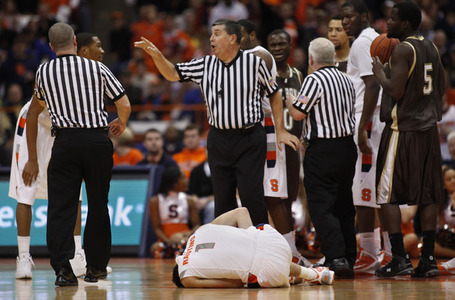 Could have been worse I suppose, Nicholson could have messed up Andy's hair.  Talk about a sensitive part of Andy's anatomy.

Andy did recover but one player who wasn't able to come back from his own injury was Arinze Onuaku.  AO went to the bench only two minutes into the game where trainer Brad Pike worked on his leg.  Arinze went to the locker room, returned briefly but did not play at all in the second half.  The injury is being evaluated and we should know more today:

Onuaku was not in the Syracuse locker room when reporters were admitted. Brad Pike said he will evaluate Onuaku on Sunday. Pike did say that the damage was not to the tendon that has given Onuaku so much trouble.

At the end of the day it was three-pointers that helped the Orange pull away and quell the Bonnies' attack.  It seemed like any time St. Bonaventure got close, someone was stepping up with a killer three to squash them.

Syracuse took over the game with a 21-4 run that spanned the halftime break. Syracuse freshman Brandon Triche highlighted the spurt with consecutive 3-pointers that gave the Orange a 51-39 advantage at the 15:36 mark of the second half.

...The Orange eventually extended its lead to 16 points. When St. Bonaventure closed to within nine points with just under 10 minutes remaining, Syracuse senior Andy Rautins drained back-to-back 3-pointers for a 69-54 lead.

Looks like the little Rautins (whom I like to call Ed & Hardy) are going to be just fine.

Here's Andy, Wes & KrisJo discussing the game as well as The Nutshot Felt 'Round The Dome: