Ed. Note: Great investigative journalism here by VotePrime.You should all be this involved.

Andy has a tattoo, and apparently that makes the lady Ottos swoon. But what the heck is his tattoo in the first place?

Well, initial searching didn't pull up much, though I did learn he has another less visible tattoo on his "meaty rib cage" (no homo, just Canadian):

Said Leo, who turns 49 tomorrow: "I was absolutely saying, `No way, not a chance, never.’ But Andy showed me the design. It’s pretty cool when your kids think the family means that much that they want something like that."

The elder Rautins got his on the back of his neck, below the collar line. Andy got a larger version that covers some of his suddenly meatier rib cage. Bound by blood and ink and torn ligaments, they’ll tell you they are stronger for it.

It was, truly, a family tattoo: A so-called ambigram that, viewed from one angle, spelled "Family" and from another "Forever."

I’m sure when viewed from yet another angle it also reads, "DEVO."

But there's still an unnamed inner bicep tattoo out there. TO THE PHOTOS! 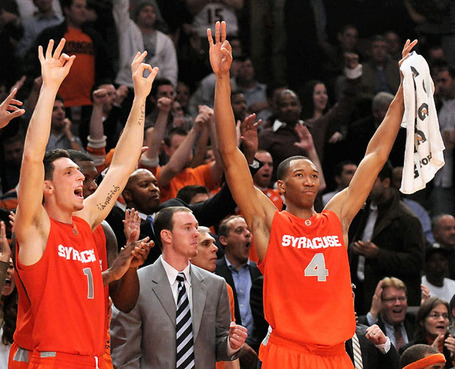 If you click on the larger version you can see what looks like "Andrius" with some stars and loops thrown in to make it pretty. Search Wikipedia for Andrius and you get forwarded to the entry for "Andrew," and a list of Andrew variants from around the world. So if Wikipedia can be trusted, Andy Rautins has the Lithuanian form of his first name on his inner bicep.

As for the tattoo on his wrist, it looks like Canadian pride: I see a maple leaf and (maybe) some Roman numerals: 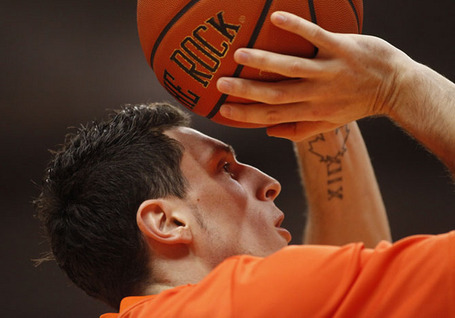 Update: An animated .gif of that ambigram "family/forever" tattoo, via Alex O: