Night Of The Dolphins

Share All sharing options for: Night Of The Dolphins 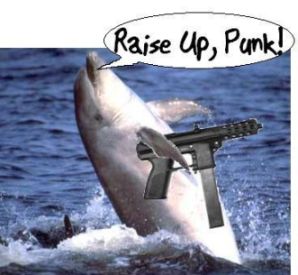 Mike Waters already used the Day of the Dolphins headline, which is the best possible headline for a situation like this.  So bravo to you and your copy editor, Mike.  You took Dolphins and made Dolphinade.

So...what the hell just happened? Anyone?

Le Moyne just beat Syracuse in basketball. Let that sink in. LeMo just came across town to the Carrier Dome, where Division 1 Syracuse plays. A Big East Conference team. Division 2 Le Moyne just won 82 to 79. This is not as horrific as you may think as Syracuse could have poured it on earlier, but this is a dark day in SU Basketball history.

Yes, you read that headline right. Playing in an exhibition game at the Carrier Dome, the mighty Syracuse Orangemen -- one of the elite college basketball programs in the country each and every year -- lost 82-79 to the not-as-equally mighty LeMoyne Dolphins. Yes, the LeMoyne Dolphins. I promise this is not a joke.

Syracuse let Le Moyne shoot nearly 48 percent in the game. You can't really break this game down in a blog post. It is a major conference Division I program with top national talent losing to a D-II program. Words fail.

What the shit is right. So, really, what the hell just happened?  Forget about who was playing and what was at stake, the game actually featured one hell of a finish.

Syracuse trailed 78-76 with less than a minute to play when Wes Johnson  hit a three from the corner to give Syracuse a one-point lead with 17 seconds left. LeMoyne's Christopher Johnson then answered with a three of his own and LeMoyne added two free throw to seal the 82-79 win and destroy what little goodwill the Orange had built up over the last few weeks.

The Orange struggled on defense the entire game. Boeheim stuck to a man-to-man defense despite the fact that the Orange never seemed capable of defending LeMoyne’s outside shooters without giving up backdoor cuts.

"I like LeMoyne’s team,’’ Boeheim said. "I think they’re a good team; a very good team. If we played them again this week, they’d give us a tough game and would have the same opportunity if we played man-to-man. We’ve got a lot of work to do in our defense and not that much time to do it.’’

Leave it to SUAthletics to make it sound all not-that-bad.  The game was a "narrow" loss for the Orange.  Though they do point out the one silver-lining on the evening.  Wes Johnson is fo' reals, yo.

Junior forward Wesley Johnson led all scorers with 34 points...Johnson single-handedly assembled a six-point run, netting three-straight field goals to give the Orange a 15-6 advantage with 12:41 remaining in the first half.

Credit where credit is due, the LeMoyne players played the game of their lives.  And they'll have the memory of this win for a long time.

"This is the best," said Le Moyne guard Chris Johnson. "The best feeling I ever had in my life. Period. Absolutely."

"Whenever you beat SU in the Dome, it’s just ridiculous," center/forward Laurence Ekperigin said. "Whether it counts or not."

Brent Axe tries to find another silver lining to all of this.  He supposes that, if we had to lose to a Division II school, best that it was LeMoyne and not someone we didn't know.

Look, Syracuse losing to LeMoyne isn't good, exhibition or not. It is early and everything and the good that will come out this is the gigantic wake up call this Syracuse team will get out of it.

But if Syracuse is going to lose to a game like this, aren't you glad it is LeMoyne instead of some random team no one in this town can connect with?

Someone actually had the cojones to ask Boeheim about how he felt going for his 800th career-win against Albany on Monday.  Boeheim was...Boeheim.

"I’m not concerned about anything except this team (and) getting this team ready,’’ Boeheim said, cutting off the question in mid-sentence. "Period. That’s it. Nothing else.’’

Finally, the final word comes to us from, where else, Twitter.  The normally-chatty SU basketball team has been mostly radio silent since last night.  Only freshman DaShonte Riley has expressed some thoughts on the game and on his own play.  Thoughts that should give SU fans some manner of hope for the future.

was given the opportunity and failed to produce. Never again will I be ill-prepared.

Batman's Dad was right.  Why do we fall?  So we can learn to pick ourselves up.  It worked out pretty well for Batman.  It should work out well for DaShonte and the Orange as well.  I hope.