Syracuse Athletics Has Had Better Weeks

Share All sharing options for: Syracuse Athletics Has Had Better Weeks

I've been racking my brain since last night trying to figure out if this is the worst two-day stretch in Syracuse Athletics history.

I mean, we've had some bad days.  Keith "F***ing" Smart.  The Akron loss. Getting snubbed by the NCAA Tourney.  There's a ton more out there.  But has there ever been a two-day period that has had sent such negative tidal waves throughout Cuse Nation via multiple sports?  I'm not so sure.

Monday, Mike Williams quit and our coach got misty-eyed defending a starting quarterback whom few people think should still be starting.  And at the expense of the "back-up," who will be here a lot longer than the current starter.  It was...awkward.  Suddenly, I had this feeling in the pit of my stomach.  It was a familiar feeling.  It felt like...the last four years.

Then Tuesday, the details behind Williams come out.  Four SU players break team rules and get into a car accident.  Those who didn't walk into Marrone's office and quit are suspended and among them is our 2nd-leading rusher.  We also find out one of our key defensive linemen, Jared Kimmel, is out for the year but things are so crazy that it barely registers.  Then, our basketball team picks the worst possible day of the week, when nothing else is going on, to lay a stinkbomb against a Division II school.  Not just any Division II school.  The Division II school ten minutes down the road.  The Division II school that will be able to hold that over our heads forever. 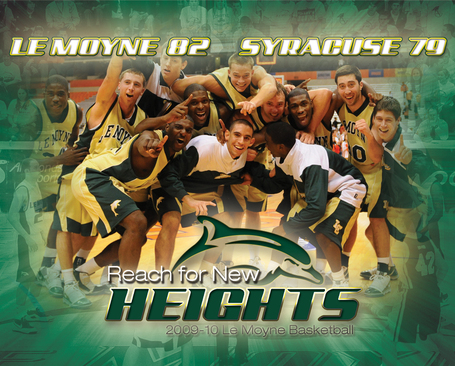 How does a Dolphin reach for anything?  And I still demand to know what a school in landlocked Upstate New York is doing with a Dolphin for a mascot.  But I digress...

If Syracuse loses this game the day before or the day after, it's a comical story that gets some national attention but not too much.  Because SU chose to lose this one on the day when there was no World Series, no NFL and no major sports story...we became the major sports story.

"Let's not blow this out of proportion.  It's an exhibition game."  You know what....you're right.  And you're wrong.  You're right from the (tremendous) standpoint that it doesn't count, Boeheim is still working out the kinks and the team didn't play to it's full potential.  But you're wrong because perception is reality.  It's one thing to fly under the radar as a fringe Top 25 team that can play the "nobody believed in us" card.  It's another thing to lose to a DII team and be ridiculed nationwide to the point where you can't find a college basketball fan or pundit who thinks we're going to win 20 games right now.

I have to now listen to Doug Gottlieb, Dana O'Neill, Pat Forde and all of the other Cuse-haters make snide comments for the next three months because nothing we do in that time we erase the stink of this loss.  Only if we make strides in the Big East will everyone be able to look back and laugh about this.  Otherwise, the season hasn't even started yet and we've already defined it.  Awesome.

Alright, Wednesday...what have you got for me?  The SU lacrosse team was arrested in Tijuana for orchestrating a cockfighting ring?  The SU volleyball team is responsible for swine flu?  The Carrier Dome is being renamed the Poulon Weedeater Dome?  Bring it on...I'm finally ready.