The Quest For Toronto - Week Nine

Share All sharing options for: The Quest For Toronto - Week Nine It's not often that the Meter moves based on anything outside the games themselves but you have to admit that the Quest has taken a very difficult turn in the last few days.  The loss to Cincy stung but was not unexpected.  The loss of Mike Williams...well that stung AND it was extremely unexpected.  Couple that with the fact that it seems like half the team is suspended for the Pitt game and the slim chances of winning that one are fading as well.  Marrone is insistent on Paulus despite the statistical evidence to the contrary.  The pass defense continues to be leakier than a Louisiana levee. Short of some kind of Ewing Theory-type madness, things don't feel good for the Orange. And the Quest-O-Meter reflects that. 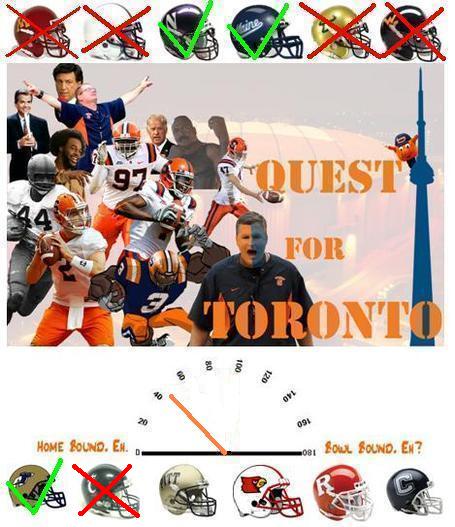