Syracuse Doesn't Want To Fall Into The Corn-hole

Share All sharing options for: Syracuse Doesn't Want To Fall Into The Corn-hole

Arinze, KrisJo, Andy, Wes & Brandon talk about the week that was and tonight's Cornell game.

Arinze Onuaku is EXCITED about Syracuse basketball!!!  Can you feel it?  Though obviously this is the best part of the video: 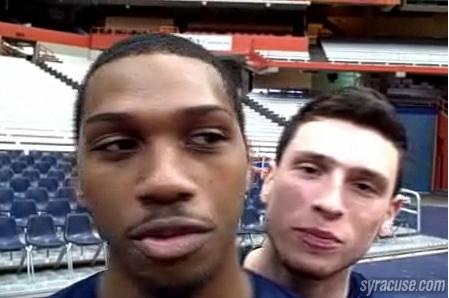 Loving this whole Andy The Leader thing.  "I'd rather be unranked."  Mr. Senior is not buying into his own hype...good stuff.  And hopefully the rest of the team is feeling the same way as Cornell comes to town this evening.

The name of the game will be shutting down Cornell's outside shooters, specifically senior Ryan Wittman.  Wittman's 33 against the Orange last year were the most any player scored against SU in regulation.  But Wittman isn't the only weapon in the Big Red arsenal, they've got a whole bunch of talented players:

What Cornell lacks in athleticism or talent they make up for in chemistry and senior leadership.  Ask Wittman and he'll tell you "This is the best (team) I’ve been on here. We’ve got loads of experience and a ton of depth. We’re really familiar with each other and really excited for this year." So...you know.

Cornell coach Steve Donahue praises what he's seen from the Orange so far, saying this year's squad "plays together better than any team, offensively and defensively, that (Boeheim's) ever had since I've been here."  He doles out the big praise especially for Wes Johnson, who gets the ultimate Cuse comparison:

"Wes Johnson, to me, looks like a lottery pick type of kid," Donahue said. "I think he's someone that gives Syracuse something that Carmelo Anthony gave them, an inside-outside guy. Can he be as good as Carmelo Anthony? Well, he's older and he's long and athletic and he really shoots it."

Last year the Big Red gave the Orange a game.  SU had to rally from 16 points down in order to win.  If the Orange let Wittman and his pals shoot lights out again, they could find themselves in the same hole.  The target is officially on Syracuse's back now, let's see how they play when they're expected to win.