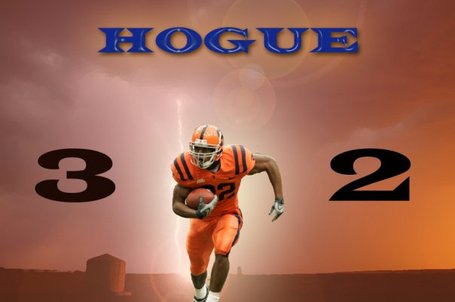 Hey may no longer carry the football through desolate farmland in the middle of a lightning storm, but Doug Hogue knows a little something about shock and awe.  The converted linebacker went all Derrell Smith on us against Rutgers, getting 7 tackles, 3.5 sacks (!) and a forced fumble.  6.5 of those tackles were for a loss, a new Syracuse record.  All of that was good enough for Douggers to be named not only the Big East Defensive Player of the Week but also the Walter Camp Football Foundation National Defensive Player of the Week.

Hogue ranks 15th nationally and second in the BIG EAST in sacks per game with .86 and ties for 15th in the country and is first in the league with 1.45 tackles for loss per game. His 16.5 tackles for loss this season ties for fourth on the Syracuse single-season record list.

All around, folks are feeling pretty good about SU football. which is really saying something considering how down we all were last week.  Donnie Webb ponders just how different the questions we're asking ourselves today from the usual ones...

When was the last time Syracuse University football fans could spend a Sunday debating the merits of an onsides kick instead of the merits of the starting quarterback? Or bemoaning a blocked punt instead of the failure of the offensive line to block anybody? Or discussing whether the Orange should have punched in another touchdown at the end for good measure instead of wondering if another touchdown would come at all this season?

Even John at Orange44, who was calling for the beginning of the true Nassib Era as recently as last week, is coming around on these Marrone and Paulus folks.

All other things aside, every Syracuse fan wants Doug Marrone & Co. to walk away from Rentschler Field with a W. That said, Greg Paulus will round out the schedule having started each Syracuse game this year. Why? Because Doug Marrone knew the whole time that even though Syracuse won’t win every game it plays, Greg Paulus gives the team the greatest chance of winning. Doug, I agree. Obviously Nassib will get his share of packages, but this is Greg Paulus’ team.

Post-game video and interviews after the jump...

Doug Marrone discussing the Rutgers' win.  Try not to get too excited there, chief.

Linebackers Mike Stenclik and Doug Hogue (and his mega-watt smile) on the team beating Rutgers, 31-13.

Bud Poliquin and his Three Stooges' tie inside the Carrier Dome.  Turns out SU football ruined Bud's bit.  Or did they???

CitrusTV's Jon Erwin, Ravi Masand, and Aneesh Saxena tell why the Orange had no problem getting to Rutgers QB Tom Savage. They also explain how the combo of Greg Paulus and Ryan Nassib were so effective for the 'Cuse.

CitrusTV's Jon Erwin, Ravi Masand, and Aneesh Saxena explain why this win was so important for the Syracuse Orange and look ahead to next year.