Before this past Saturday's Syracuse-Rutgers game, most folks (including me) were predicting that one side would beat the other fairly easily.  Well, we got it half right.  Out-manned, out-gunned and without a reason to care, the Syracuse Orange proved to anyone watching that the Doug Marrone Era is going to be a very good one by whipping the pants off of No. 25 Rutgers 31-13 on Senior Day.

Antwon Bailey, Averin Collier and Delone Carter each ran for a touchdown, as Syracuse upended 25th-ranked Rutgers, 31-13, to pick up its first Big East victory of the season.

The Orange (4-7, 1-5 Big East) racked up 213 yards on the ground in a balanced attack that also saw Greg Paulus throw for 142 yards and a score on 13-of-16 completions. Ryan Nassib completed four passes for 69 yards, as Syracuse snapped a three-game slide.

"I don't look at it as a breakthrough win," Syracuse head coach Doug Marrone

It's my fault.  I should have realized The Inverse Theory Of Syracuse Winnatude, which states:

With two games remaining in the season, with nothing left to play for and against an opponent they really shouldn't be able to beat, the Syracuse football team will play to the fullest extent of it's potential. (See: Notre Dame 2008)

It's science, you guys.  Don't fight it.

Yes, the offense was in rare form.  Greg Paulus all-but-assured himself of that passing percentage record everyone keeps yapping about by going 13-16 for 142 yards and a touchdown.  Ryan Nassib also got in on this high-passing percentage thing, going 4-6 for 69 yards.

The running game was once again solid but unlike previous games, this time it wasn't just Delone Carter.  The Orange were instead a three-headed monster.  Along with Carter (67 yards, TD), Antwon Bailey actually led the Orange with 77yards and TD while Averin Collier notched his best performance of the year with 66 yards and a TD.

And how bout those wide receivers?  Sure, the Orange have no way to replace the home-run aspect lost by Mike Williams but SU found a balance they have lacked, as four different receiverscaught three balls, including Bailey (47 yards), Marcus Sales (44 yards) and Alec Lemon (40 yards).  Carl Cutler caught one ball for one yard but it was also the one passing touchdown on the day. (Full boxscore)

But how bout that defense?  The Orange sacked Rutgers' QB Tom Savage nine times.  NINE TIMES!  How many times?

Linebacker Doug Hogue, who broke the SU record with tackles for loss in a game (6 1/2) and owned 3 1/2 of those sacks gives the defense the kind of accolade only a Doug Marrone could love:

"From a defensive standpoint, everybody was doing their jobs," Hogue said. "They allow me to wiggle loose and I did what I did."

And Jesus Christ, Rutgers.  What the hell happened to you?  I know we've been kidding you all season about your schedule but you really might want to consider scheduling a couple more high schools.  You know we lost to Louisville two weeks ago, right?  LOUISVILLE!  Shame on you. Not that I'm complaining, you finally gave SUAthletics.com a reason to put the score of the game into their recap.  Thanks. 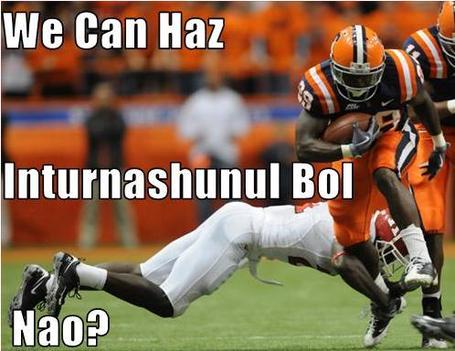 So where the hell did this come from?  Without it's three best players and dozens more, Syracuse played out of their mind.  Who could have possibly seen this coming?

"People may not have seen this coming, or whatever they want to say, on the outside," Marrone declared. "But I can’t stand here today and say that I did not see this coming. I really can’t. And I won’t do that because I’m not going to discredit what this team has been working so hard for, and building, and trying to get done for this community and for this university."

If you want to nitpick there was still plenty to nitpick.  Nothing stands out more than the special teams unit which once again provided the lowlights on the day. Bob Casullo's unit had a lot to answer for after the game.  Had it been a closer one, they might have been the reason the Orange lost.

Two blocked punts, one through the back of the end zone for a safety. A blocked field-goal attempt with the outcome hanging in the balance. A 50-yard kickoff return. A recovered onside kick attempt to set up a touchdown.

That No. 25 Rutgers was able to produce that bevy of big plays on special teams and still lose by 18 points shows how thoroughly it was dominated everywhere else Saturday by the underdog Syracuse University football team.

Thank God for the other dominating units.  More game links and recaps below.  Enjoy this one, folks.  What a great send-off for the seniors who will not have to say they never beat Rutgers.  It wasn't long ago a four-year SU senior expected to beat the Scarlet Knights all four times.  For now, we're extremely happy with this one.  And we're looking forward to getting the next one sooner than later.

Oh and by the way think about what this just did for recruiting.  All we heard last week was how NY-area recruits shunned SU for Rutgers because of the way the Knights dominated the Orange in every aspect.  Me thinks the tide will be turning...

Orange sends its senior class out with a 31-13 smackdown of Rutgers...Donnie Webb

Notebook: Shoes optional for Bailey in running over Rutgers...Donnie Webb

The Syracuse Orange's Domination of Rutgers Signals a Return to Normalcy...Dan Kelley

Knightmare At The Dome...Protect R Turf

Syracuse is determined to make Rutgers a rivalry...Brian Bennett

Speaking of Mr. Keeley, I always thought the ironic part of his infamous "Quest for Toronto" series of posts was that, because of how awful the Big East’s bowl tie-ins are, it’s actually disturbingly difficult to land a half decent bid. Even when UConn is doing their part for the conference against Notre Dame (which I now cannot enjoy). Well, Sean may just end up getting his wish, albeit not in a way that he may have originally intended. On the day, a Syracuse victory may just have ended up sending a team to Toronto for the holidays.

Believe me, sir, it's bittersweet.