Tobias Harris: A Good Reminder For Fans. And Recruits.

Share All sharing options for: Tobias Harris: A Good Reminder For Fans. And Recruits. 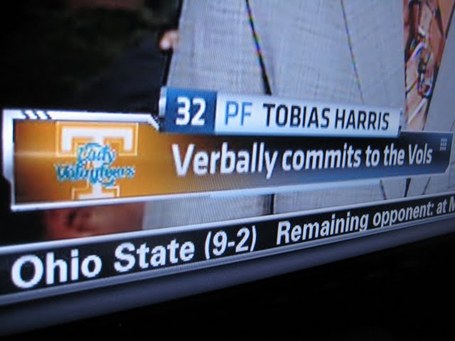 Tobias Harris is learning a valuable lesson today in marketing.  He's already seeing how his decisions affect his reach.  And he's also learning that, when deciding on where to go to college and you know you're not going to choose the team in New York, don't go to a prominent New York establishment when fans of that team are out in droves and are allowed to sit all around you while you make your decision known. (Video courtesy of The Orange Fizz)

Are we jerks for booing a 17-year-old kid over his life choices?  Of course we are.  But Tobias isn't sitting in an ESPN Zone surrounded by Syracuse fans unless Tobias makes that happen.  You get what you pay for.  Or you pay for what you get.

The Orange Fizz, who had their paws all over the Tobias story from the get-go, find the reaction troubling:

But we all need to keep perspective. These are 18-year-old kids, deciding where they want to spend their next few seasons playing sports. Tobias did not jerk everyone around. He did not continually delay his decision. He professionally went about his business, with a structured family unit in tow. And decided on Tennessee.

And we booed. Watch the video. Fans dressed in orange (I'm assuming they're not Vols fans), on their way to the Garden for the Cal tilt hissed.

Maybe not.  But Tobias should have known better.  He's a sports fan himself.  He knows how deep allegiances and passion runs.  Especially on a game day when NYC Syracuse fans had their hackles up in preparation for the big showdown with Cal in a few hours.

Besides, Tobias should probably get used to it.  You're entering the world of college athletics.  Not only that you're entered the world of the SEC, where college sports are 100 times more paramount than in the Northeast.  Getting booed by fans might be the least of your concerns.

At the end of the day, I think we're all done.  Tobias isn't the first high-profile recruit to spurn the Orange.  He won't be the last.  Like many have said, SU has nothing to worry about in that department, our 2010 class is stacked.

Lessons learned, everyone.  Let's get back to work.  Tobias, good luck, the Lady Vols are lucky to have you.